END_OF_DOCUMENT_TOKEN_TO_BE_REPLACED

GOLD PRICES rallied and fell back for UK and Euro investors on Tuesday as the Dollar price touched 9-month lows in the face of the US currency hitting the highest since 2002 on the foreign exchange market.
Rising to new 20-year highs on its trade-weighted index against the rest of the world's major currencies, the Dollar on Tuesday pushed the Euro down to $1.00 – the first touch of parity since December 2002.
With gold priced in the Dollar trading at 9-month lows of $1733, down 16.1% from March's near-record high, Euro bullion prices today spiked to 1-week highs near €1740 per ounce before falling to €1733, down less than 10% from the Russia-Ukraine peak 4 months ago.
The UK gold price in Pounds per ounce also spiked and retreated in the face of the Dollar's FX surge, adding 1.5% for the week so far at a high of £1448. 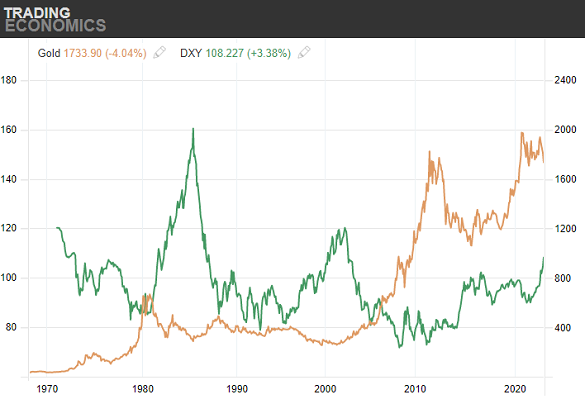 Global stock markets meantime fell for a 2nd session on Tuesday, dropping to 1-week lows on the MSCI World Index just 3.2% above mid-June's 18-month low.
US crude oil prices dropped back through $100 per barrel as European Brent also sank more than 4% in Dollar terms.
Copper fell yet again, dropping to 19-month lows almost 30% below early March's record highs.
"Last week saw a major wash-out in both gold and silver as the markets finally buckled," says precious-metals specialist Rhona O'Connell at brokerage StoneX.
"The last straw was the surge in the Dollar on increasing fears of a global recession on the one hand, but also the conflicting fact that factory orders came in [stronger than forecast and] underpinned concerns that the hawks on the FOMC might get the upper hand in the [Fed's] late July meeting."
With 2 weeks until the US central bank's policy team next meet, betting on interest-rate derivatives now sees 100% odds of another 0.75-percentage point hike or more.
Further out, betting on the Federal Reserve's key monetary policy tool now sees odds greater than 5-in-6 that the US central bank will hike to a ceiling of 3.50% or above before the end of 2022, sharply higher from today's 1.75% ceiling.
However, the impact of those expectations on bond prices means that 2-year Treasury bonds now yield more than Washington's 10-year debt, creating a "negative yield curve" once again on Tuesday and implying that the Fed will need to start cutting interest rates again in the future, with the shorter-term rate at 3.04% as longer-term rates held around 3.00%.
Each of the Federal Reserve's 5 last rate-hiking cycles have ended when the 2-year yield has risen above 10-year rates. 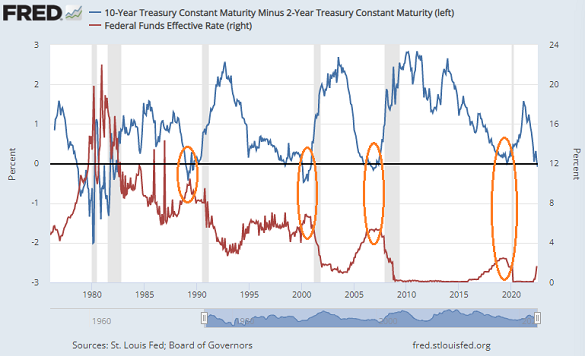 The surging Dollar meantime took India's Rupee down to fresh record lows yet again on Tuesday.
Faced with a widening current account deficit as the cost of energy imports soar, India – the No.2 gold consumer nation behind China – this month hiked gold bullion import duty back up to 12.5% in a bid to deter inflows of metal needing outflows of foreign currency.
The Reserve Bank of India today announced that some international trade can now be billed and paid in Rupees "in order to promote growth of global trade with emphasis on exports from India and to support the increasing interest of global trading community in INR."
Besides aiming to defend the Rupee by reducing the volume of trade needing US Dollars, the RBI's move is widely seen as aiding Indian exporters wanting to do business with Russia amid US and other Western sanctions over its invasion of Ukraine.