END_OF_DOCUMENT_TOKEN_TO_BE_REPLACED

GOLD PRICES headed for their lowest Friday finish in 15 months in London today, falling for the 9th week out of the last 11 against a soaring Dollar as new US data said the world's largest economy added more jobs than analysts forecast in June, holding the unemployment rate near its lowest since the late 1960s.

Government bond prices also slipped again after trying to rally from this week's sell-off, edging up benchmark US 10-year yields back above 3.00% per annum, but keeping them below the rate on 2-year bonds.

Known as a "yield inversion", this suggests that the Federal Reserve – having embarked on its steepest rate-hiking campaign since the mid-1990s to fight the worst inflation since the early '80s – will need to cut rates again further ahead.

This pattern has preceded each of the last 9 recessions in the US.

"While gold is caught between elevated inflation risks and growing concerns over a recession," Reuters quotes precious-metals analyst Suki Cooper at bullion market-making bank Standard Chartered, "it has reverted to taking its cue from the Dollar."

While the US currency "has benefited from safe-haven flows" amid the Ukraine war, soaring energy costs and the worsening global economic outlook, she adds, "Gold is also vulnerable to a weaker price floor amid the seasonally slow period for demand. 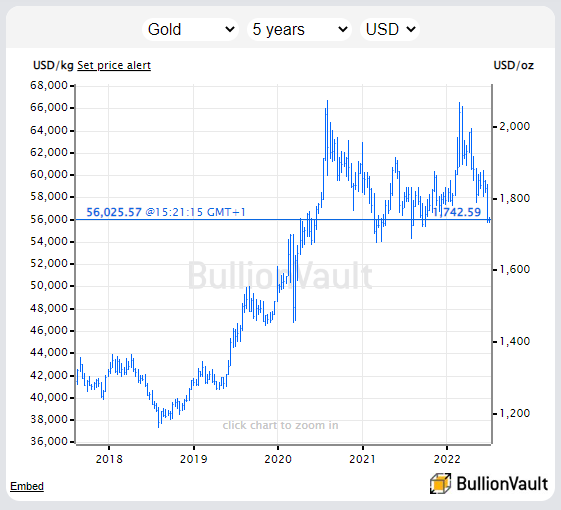 Trading beneath $1940 per ounce today – 3.2% below last Friday's PM benchmark price in London – that put gold on track for its worst weekly loss since mid-May and its lowest weekend level since April 2021.

With the US Dollar meantime rising to fresh 2-decade highs against the rest of the world's major currencies, the Euro fell within 1 cent of parity to the greenback – a level not seen since December 2002.

The Dollar's strength against the Euro capped gold's weekly drop for German, French, Italian and other investors in the 19-nation currency union at 0.9%.

But like the UK gold price in Pounds per ounce – now down at £1450 – today's level of €1716 still marked gold's lowest Friday finish since late-February.

That had come after the Communist regime in China said it may allow local governments to borrow the equivalent of almost $225 billion to spend on new infrastructure projects, stimulating the economy as the world's most populous country – and its No.1 gold consumer – faces zero growth in manufacturing and service-sector activity despite relaxing Covid lockdown rules.

Friday saw copper prices heading for their fifth weekly decline in a row, erasing more than 1/3rd of yesterday's 5.6% rebound, while crude oil slipped but held above $100 per barrel.

Gold No.2 consumer India will next week launch its new India International Bullion Exchange (IIBX), a trading exchange for dealers and jewellers to acquire bullion which they then transfer out of duty-free storage.

Aimed at enabling India's gold industry to better manage its stockpiles without incurring import tax until metal is needed, this facility will still trigger the country's standard gold import duty – hiked back up to a modern-era record of 12.5% by the administration of Narendra Modi last Friday – when the buyer withdraws the bullion.

Modi will himself "inaugurate" the first IIBX deals according to unnamed source quoted by Indian media – something he was first rumored to be doing when the IIBX's launch was trailled for September last year.