END_OF_DOCUMENT_TOKEN_TO_BE_REPLACED

GOLD PRICES jumped in Asian and London trade Tuesday, nearing 3-week highs and touching $1815 per ounce as global stock markets slipped in the face of crude oil hitting its highest since late-2014 as talks over output quotas for the Opec producers' cartel ended without a deal.
Corn and wheat prices slipped in contrast, but copper prices also rose as US crude oil held near $76 per barrel, cutting the base metal's drop since early-May's new record highs to less than 10%.
Despite the surge in energy costs, longer-term interest rates fell in the bond market as the Covid pandemic continued to accelerate in Asia and Africa but some European nations moved to start easing restrictions.
With gold prices edging back to $1807 as the start of New York trade approached, 10-year US Treasury bond yields slipped to 1.43% per annum, while the yield on inflation-protected TIPS fell to minus 0.93%, the lowest since mid-February.
Together that pushed the bond market's implied inflation-rate forecast up to 2.36% per annum, the strongest "breakeven" rate in 3 weeks and the highest since 2013 when it was first reached in late-April. 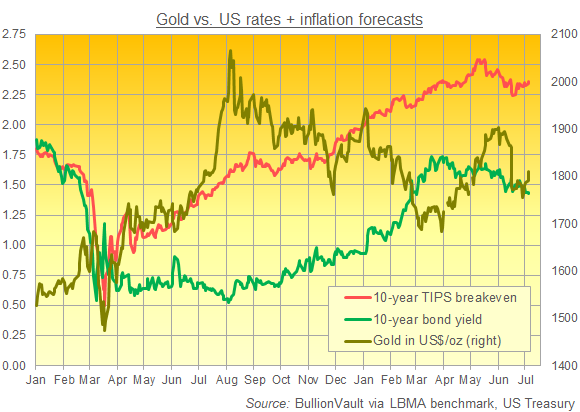 Ahead of Wednesday's release of notes from the Federal Reserve's latest policy meeting, "It is way too early in the economic cycle to aggressively own gold," says investment analysis from Swiss refining and finance group MKS Pamp, "as taper and hike expectations have been brought forward and many believe the Fed will stay ahead of the inflation curve.
"[But] while gold is on the defense recently...prices are unlikely to mimic the strong [taper tantrum] washout in 2013, because this time around there's strong central-bank demand, ETF resiliency and structural [wholesale market] longs...who continue to allocate to gold as a hedge to equity market inflation."
Asian and European stock markets slipped overall on Tuesday after creeping higher when the USA was shut yesterday for the Fourth of July.
Following "healthy" central-bank gold demand on the latest data – most especially from Hungary and Thailand – Russia's finance ministry overnight included a reference to buying gold for the first time in its monthly foreign-exchange purchase plans.
Saying it will sell 296 billion Roubles by end-July, currently worth some US$4bn and almost a fifth more than analysts polled by Reuters expected, "The ministry did not give details of its gold-buying plan" however.
Gold-backed ETF trust funds shrank a little on Monday, cutting the metal giving their shares value by 0.5 tonnes to 3,126 tonnes worldwide.
Germany's Xetra-Gold product saw "a surge in demand" over the first 6 months of the year says share issuer Deutsche Börse, now needing a record 233 tonnes of backing.
Xetra's 7.4% first-half expansion contrasts with 10.6% net liquidation of US giant the GLD, which ended June needing 1,045 tonnes of backing, albeit 18 tonnes above March's 12-month low.
"Any gold dump should be transitory," concludes MKS Pamp, "especially if the belief is that the current hawkish Fed stance will likely also prove transitory."
Confirming the end of mandatory masks and social restrictions in England in 2 weeks time, the UK's new health minister Sajid Javid said that "double jabbed" adults as well as the Under-18s will no longer have to self-isolate if they come into contact with a positive case from 16 August.
The relaxations may see case rates hit 100,000 per day, Javid went on – almost 50% greater than New Year 2021's record – but with hospitalizations running at just 1/10th of the pace seen when infections were last at current levels, "We are increasingly confident that our plan is working."
Seven of Europe's 9 worst Covid hotspots per 100,000 residents are currently in the UK, five of them in Scotland.
"It's not like this thing has gone away," said Mike Ryan of the World Health Organization on Monday, adding that "It isn't over" in Europe or the Americas after a colleague said last week that "the speed and scale" of the disease's 3rd wave across Africa "is like nothing we've seen before."
Gold prices in China – where the authorities today imposed lockdown on the south-western border town of Ruili for the 4th time whilst also accusing Australia of "sabotaging" Beijing's vaccine diplomacy in Asia – today cut their premium to London's rising quotes, showing the weakest premium in 2 weeks at $1.50 per ounce.
London silver bullion prices also rose towards 3-week highs on Tuesday, touching $26.77 per ounce before retreating by 20 cents.