END_OF_DOCUMENT_TOKEN_TO_BE_REPLACED

GOLD PRICES reached a 2-week high on Friday, ignoring better-than-expected US payroll data as US Treasury bond yields fell to a 2-week low.
Spot gold prices whipsawed after the data was released, falling to $1776 per ounce before quickly rising to $1795, the highest since 18 June. The yellow metal made a 2nd weekly gain by cutting the worst monthly loss since 2016 recorded in June.
The Bureau of Labor Statistics estimates that the world's largest economy added 850,000 jobs in June, the most since August last year and well above consensus forecasts for 700,000 net jobs growth with the 7th strongest monthly rise since data began in 1939.
Six of those record months have come since May 2020 as the US economy recovered from the Covid shutdown shock. 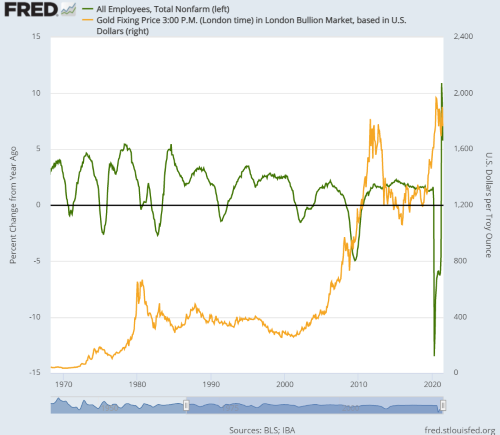 "Gold posted mild gains [earlier this week] despite ADP payrolls beating expectations [on Wednesday], providing a good preview for Friday's numbers," says a trading note from Swiss refiners and finance group MKS Pamp.
"Gold should be asymmetrically sensitive to US data following the hawkish FOMC (ie, larger impetus to fall on data beats, vs rally on data misses), so this indicates that some physical demand out of the Far East is offsetting any momentum shorts" in the speculative Comex derivatives market.
Thursday's gold-price action left both the giant GLD gold-backed ETF and its smaller IAU competitor unchanged in size once again.
With more US Fed members calling for an earlier end to QE and zero interest rates this week, a "taper tantrum" threatens to hit gold prices, says a note from rating agency Fitch Solutions, but the metal will likely find supportive investment demand from worries over inflation.
"Gold and commodities [show] no direct correlation with inflation and they are volatile," writes columnist John Plender in today's FT.
"[But] now the opportunity cost of holding gold or commodities is less than it’s ever been. The yield on most publicly traded securities is paltry.
"It thus makes sense to have at least a small portfolio stake in gold or , with the additional advantage that they provide genuine diversification."
European stock markets rose earlier Friday, extending the new all-time record high set Thursday by the MSCI World Index of developed-economy equities.
Japan and Australia's stock markets also rose overnight, but China's CSI300 sank 2.8% and Hong Kong dropped 1.8% after Chinese President Xi Jinping marked the 100th birthday of the Communist Party he leads by threatening "broken heads and bloodshed" on any foreign powers attempting "to bully, oppress or enslave us."
"Xi's speech seen favorably by foreign experts, onlookers," claims Beijing mouthpiece the China Daily.
Neighboring Taiwan however – still enjoying the explicit backing of the USA and its military allies – condemned the "dictatorship" after Xi pledged "complete reunification" with the former Chinese state province.
The Yuan weakened again versus the Dollar on Friday, falling to 2-month lows and helping clip the Shanghai gold premium for bullion landed in China – the metal's No.1 consumer market – back to $3.50 above London quotes, down from yesterday's incentive for new imports of $4.70 per ounce.