END_OF_DOCUMENT_TOKEN_TO_BE_REPLACED

GOLD PRICES sank Friday in Asian and London trade, dropping through $1800 per ounce following news of a sharp hike to bullion import duty in No.2 consumer nation India and hitting 5-month lows against a rising US Dollar even as longer-term interest rates fell hard and global stock markets dropped for the 4th session running.
With equities now erasing most of mid-June's rally from 18-month lows on the MSCI World Index, the yield offered to new buyers of 10-year US Treasury debt fell back below 3.00%.
That was a record low for Washington's borrowing costs when first reached during the global financial crisis of 2008, and it was a 3.5-year high when recovered this May amid the surge of inflation hitting 1982 levels.
Now lagging inflation by almost 8 percentage points but "attacking" the cost of living with its steepest single rate-hike in 3 decades, the Federal Reserve is "just at the beginning" of a hiking cycle said voting member Loretta Mester this week, backing another 75 basis points rise in the Fed's short-term interest rate at its July meeting.
Gold prices today fell through $1800 per ounce to reach $1785, the lowest bullion rate since the end of January and almost 14% beneath the near-record high reached in early March after Russia invaded Ukraine. 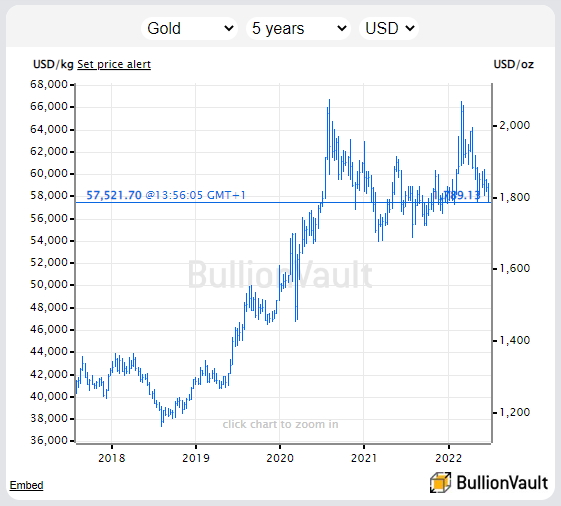 Shares in major Indian jewellers meantime lost 6% and more for the day after the Finance Ministry in Delhi reversed 2021's surprise cut to gold import duty – a move aimed at cutting the growth of gold smuggling – and took the levy back up to 12.5%.
Finance Minister Nirmala Sitharaman also imposed export taxes on crude oil and diesel on Friday, aiming to boost domestic energy supplies amid "extraordinary times" which have seen the Rupee sink to fresh all-time lows on the currency market.
Including GST sales duty, "Overall taxes on gold now rise sharply from 14% to around 18.45%," according to Somasundaram PR, regional CEO for India at the mining-industry's World Gold Council.
"Unless this is tactical and temporary, [it] will likely strengthen the grey market, with long term adverse consequences for [India's] gold market."
India's legal gold imports jumped to more than 100 tonnes in May, the highest in a year, helping the country's trade deficit widen to a new all-time record as global investors also pulled money out of what the IMF's GDP forecasts will be the fastest-growing major economy in 2022.
"Gold smuggling was falling after the duty reduction and because of Covid-19 curbs on movement of people," says a Mumbai bullion dealer speaking to Reuters. "But now it could rise again."
With domestic Indian prices rising today following the import duty hike, gold bullion fell against most other major currencies, hitting 1-month lows in Euro terms at €1715 but holding unchanged for the week in UK Pounds at £1487 as Sterling sank yet again on the FX market.
The Reserve Bank of India has been the world's heaviest central-bank gold buyer over the last 2 years, adding more than 106 tonnes to its holdings, beating Thailand (90 tonnes), Hungary (63), Brazil (62) and Egypt (45).
The Central Bank of Iraq this week said it has added 34 tonnes to its gold reserves so far this summer, a rise of 35% taking its total to 130 tonnes – inside the top 30 central-bank hoards worldwide.
Across the Gulf of Arabia, the Central Bank of Qatar also grew its gold bullion holdings on the latest data, adding more than 4 tonnes to reach nearly 56 in total.