END_OF_DOCUMENT_TOKEN_TO_BE_REPLACED

GOLD PRICES fell yet again in London on Wednesday, dropping after a voting member of the US Federal Reserve said it's "appropriate" to start tapering QE stimulus ahead of raising interest rates.
Gold priced in the Dollar struggled just $5 per ounce above yesterday's fresh 11-week low of $1756 even as global stock markets fell and interest rates dropped in the bond market amid the worsening wave of Covid infections and social restrictions.
Half of Australia's 28 million citizens are now back in lockdown as the "highly contagious" Delta variant spreads.
France today delayed unwinding restrictions amid its fourth wave of the Covid pandemic.
Some 200 Spanish students are being quarantined under police guard in the Balearic resort of Majorca after 1,000 new cases were linked to end-of-year holiday trips.
"It's appropriate to start thinking about pulling back on some of the stimulus," said Fed governor and voting member Christopher Waller to Bloomberg, saying that rates could rise in 2022 with QE tapering starting sooner.
The Fed currently creates cash to buy $40 billion of mortgage-backed securities and $80bn of US Treasury debt each month.
"Right now the housing markets are on fire; they don't need any other unnecessary support. And it's an easy sell to the public."
Energy prices defied the gloom Wednesday, rising back above $65 per barrel of European benchmark Brent.
That extended oil's gain since the end of March to more than 18%, its third consecutive quarterly rise.
Gold prices in contrast cut their rally from end-March's 9-month lows to just 4.1%. 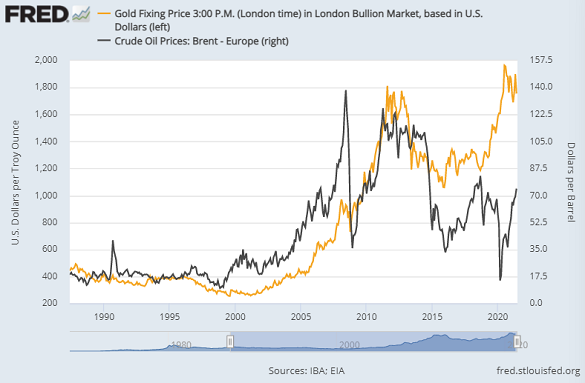 Ten-year inflation-adjusted interest rates – against which gold typically shows a strongly inverse relationship, rising when they fall and vice versa – today dropped to minus 0.88% per annum, the most negative in almost 3 weeks.
Gold prices have however lost $130 per ounce over that time.
Rising UK inflation meantime "increases the chances of a high inflation narrative becoming the dominant one, a central expectation," said outgoing Bank of England economist Andrew Haldane in a speech this morning.
"If that happened," said Haldane – calling for the Bank to act sooner than later in reducing monetary stimulus –"we would experience a Minsky Moment for monetary policy, a taper tantrum without the taper...[that] would leave monetary policy needing to play catch-up...through materially larger and/or faster interest rate rises."
Haldane has, in 66 meetings of the Monetary Policy Committee, voted against the MPC consensus just once on interest rates (now at a record low of 0.1%) and only 3 times on QE (now at a record high of £895bn).
Gold prices in China – the precious metal's No.1 consumer nation – today fell to the lowest in 2.5 months, but the premium to London quotes reached a 1-week high of nearly $5 per ounce as prices in that global storage and trading hub fell faster.
No.2 gold consumer nation India has meantime issued a notice to the United Arab Emirates moving to prosecute 2 former diplomats apparently linked to a bullion-smuggling ring run from the UAE Consulate in Thiruvananthapuram, Kerala.
The central bank of the UAE today urged the country's financial institutions to improve their anti-money laundering surveillance of precious metals customers, as well as the real estate and gems sectors.
Global standards-setter the London Bullion Market Association – which holds its AGM on Thursday, with a vote on a new rulebook for the LBMA's international membership – included UAE gold hub Dubai in a letter last autumn sent to 12 international bullion centers calling for tighter oversight of scrap and newly-mined metal flows.
"We welcome this initiative," said the UAE's economy minister Abdullah bin Touq al-Mari at the time.
But Ahmed Bin Sulayem – executive chairman of the Dubai Multi Commodities Centre (DMCC) – has repeatedly pushed back, saying that the "LBMA's authoritarian approach to maintain its majority control through conjecture and double standards has worn out its welcome with the rest of the world."