END_OF_DOCUMENT_TOKEN_TO_BE_REPLACED

GOLD PRICES rose Wednesday lunchtime in London, recovering this week's earlier 0.8% drop as global stock markets snapped a 2-day rally amid new 4-decade highs in inflation and growing recession fears ahead of US Fed chief Jerome Powell testifying to Congress on the central bank's steep hikes to interest rates.
With global equities falling again towards last week's 18-month lows, government bond prices rebounded, driving the yield offered by 10-year US Treasury debt down to the lowest in almost a fortnight at 3.15% per year, as energy and other commodity prices sank, pulling US crude oil down towards $100 per barrel.
"Risk-on mood evaporates" says a Reuters summary.
Gold priced in the Dollar in contrast rose to regain the $1840 level, while Euro gold prices touched €1750 and the UK gold price in Pounds per ounce rose back above £1500 after the world's 5th largest economy reported consumer-price inflation of 9.1% per year for May.
A new series record for UK CPI, that saw inflation on the old RPI measure reach 11.7%, the highest since the deep recession of 1981. 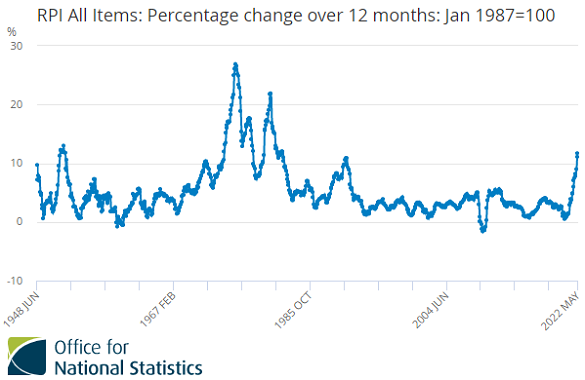 Pointing to Russia's invasion of Ukraine and China's recent Covid lockdowns both hitting global supply chains, the UK's surging inflation rate "mainly reflects previous large increases in global energy and other tradable goods prices," finance minister Rishi Sunak last week agreed with Bank of England governor Andrew Bailey.
"It is particularly important to ensure that inflationary pressures in the labour market do not persist in the medium term," the pair also said in an exchange of open letters.
With the Bank last week raising UK interest rates to just 1.25% as average UK house prices rise by 12.4% annually – near their fastest pace of the last 20 years – today marks the 2nd of 3 national rail strikes by members of the RMT union, asking for a 7% pay rise.
The Bank on Monday scrapped an affordability test for new mortgage borrowers, but left a "flow limit" on the number of new loans which lenders can make where someone is borrowing over 4.5 times their annual salary.
Germany's 2.2-million strong IG Metall union is meantime set to ask for 8% pay rises as inflation in Europe's largest economy also hits 4-decade highs.
If US inflation data don't fall sharply from May's 8.6% pace after the Federal Reserve hiked its key interest rate by 3/4 of a point for the first time since 1994 to 1.75%, "I will support a similar-sized move at our July meeting," said Fed governor Christopher  Waller – a voting member until 2030 – in a speech at the weekend.
"The Fed is 'all in' on re-establishing price stability."
More than 9-in-10 bets on July's Fed policy meeting now see the US central bank hiking by another 75 basis points next month, but betting on September's decision delivering a third such hike fell back Wednesday towards 1-in-3 after touching 1-in-2 yesterday.
"At some point in coming months, the focus of vote-seeking American politicians is likely to switch from worrying about the need to be seen to be doing something about inflation to worrying about the impact of monetary tightening on 401k [retirement] plans," reckons Christopher Wood, global head of equity strategy at financial services firm Jefferies.
"Uncertainty is generally a tailwind for gold and this, coupled with...a perceived dent in the Fed’s credibility, should be supportive, though not necessarily bullish, for gold," says analysis from bullion specialist Rhona O'Connell at brokerage StoneX – "especially while the physical markets remain subdued.
"For now gold looks like a bargain-hunting ground rather than a bull-ring."