END_OF_DOCUMENT_TOKEN_TO_BE_REPLACED

The PRICE of GOLD failed again to bounce from last week's $100 plunge in London on Tuesday, erasing a small gain made in Asian trade as world stock markets extended their rally from the longest run of losses so far in 2021.
After the MSCI World Index fell every day from Tuesday to Friday last week, equities in the Far East jumped today, adding to yesterday's strong bounce in New York ahead of US Federal Reserve chief Jerome Powell speaking to Congress about monetary policy amid the continued global Covid pandemic.
"Gold markets must now figure out if the June [Fed statement] is indeed a structural shift in the outlook," says a note from researchers at US financial giant Citi after the central bank signalled an earlier rise in interest rates sometime in 2022 or 2023 in last Wednesday's "no change" decision.
"The boost in Fed growth and inflation forecasts, and improved labor market projections, could embolden gold bears in the very short run."
Commodity markets held flat overall on Tuesday as copper stabilized from its 15% drop but crude oil slipped, while major government bond prices fell once more, nudging longer-term interest rates higher.
Inflation-adjusted US interest rates rose Monday to minus 0.75% on 10-year TIPS, the least negative real-rate outlook from the bond market of the last 8 weeks.
5-year TIPS yields meantime rose to minus 1.48% per annum, their highest since mid-December and markedly above early May's series-record low. 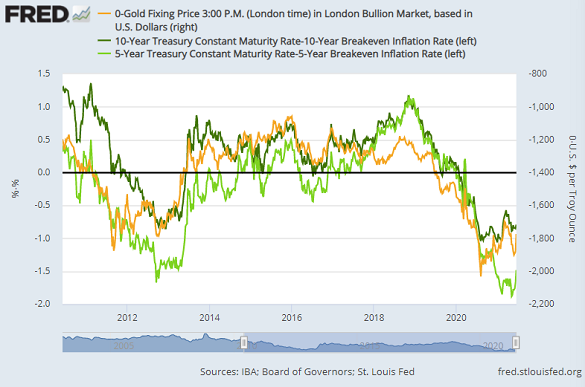 "Inflation has increased notably in recent months," the Fed's Powell will tell a Congressional subcommittee today in prepared comments "on lessons learned [from] the Federal Reserve's response to the Coronavirus pandemic.
US consumer-price inflation last month hit its fastest annual pace since 1992, reaching 3.8% per year on the 'core' measure of underlying costs.
"This reflects, in part, the very low readings from early in the pandemic falling out of the calculation," Powell will explain, "[plus] the pass-through of past increases in oil prices...the rebound in spending as the economy continues to reopen; and the exacerbating factor of supply bottlenecks.
"As these transitory supply effects abate, inflation is expected to drop back toward our longer-run goal [of 2.0% per annum]."
Either way, and with the US central bank forecasting zero interest rates until at least 2022 with QE money creation reconfirmed at $120 billion per month, Powell's opening remarks will conclude that "We at the Fed will do everything we can to support the economy for as long as it takes to complete the recovery."
Gold prices today fell back below $1780 per ounce ahead of Powell giving his testimony, a 7-week low when hit in Thursday's plunge.
Silver meantime fell back yet again from $26 per ounce, down almost 14% from February's #silversqueeze 8-year high.
A court in Chicago yesterday sentenced a former UK precious-metals trader to a year and a day in prison for 'spoofing' other traders with orders to buy and sell he never intended to execute as a way of manipulating prices to reward his genuine positions.
Convicted on 3 counts of wire fraud last September, British national James Vorley worked in the City for Deutsche Bank, then a vaulting and clearing member of the London bullion market, from 2007 to 2015, and was a director for 5 years of the London silver and gold benchmark fixing companies – replaced by an independently administered pricing auction after Deutsche suddenly quit the market.
"Everyone who works in the financial markets has to be reminded and understand that attempts to manipulate the market by any means will expose them to substantial criminal sanctions," said US District Judge John Tharp Jr.
"I take no joy in imposing this sentence."
With Vorley's co-accused due for sentencing next month, 2 traders from Merrill Lynch and 3 from J.P.Morgan will stand trial on similar charges between July and October.