END_OF_DOCUMENT_TOKEN_TO_BE_REPLACED

GOLD PRICES held unchanged in Asian and London trade Tuesday, contrasting with fresh all-time highs in global stock markets ahead of this week's monetary policy decision from the US Federal Reserve – now facing the highest forecast for inflation among US consumers since at least 2013.
Moving around $1865 per ounce, the Dollar gold price yesterday sank 1.7% to sudden 1-month lows as bond yields rose, before rallying but failing to regain the weekend's level.
Silver prices were more volatile today, falling back within 10 cents of yesterday's 1-week low at $27.50 per ounce.
Crude oil today rose sharply above $70 per barrel, but base metals slipped further from their recent all-time and multi-year highs, while foodstuffs corn and wheat both lost over 2.0%.
"Inflation is on the way, I'm a big proponent of the [new] supercycle," says Mick Davis, ex-CEO of former mining giant Xstrata and now raising mining finance through $300m special purpose acquisition company ESM (NYSE: ESM), speaking today at a Financial Times' commodities event.
"The mining industry cannot respond to demand from the green-energy revolution any time soon."
Gold mining output is set to rebound by 6% from 2020's Covid slump to reach a new annual record this year said Adam Webb, director of mine supply at Metals Focus separately today, launching the specialist consultancy's new Gold Focus 2021 report.
Scrap recycling will slow while jewelry fabrication will surge by more than one-third after sinking last year on retailers worldwide choosing to de-stock rather than buy new inventory amid the demand collapse, lockdowns and high bullion prices of 2020.
Overall the gold price will rise 3% on its annual average, said Metals Focus' director of gold and silver Neil Meader, taking it up to a new record high of $1820. 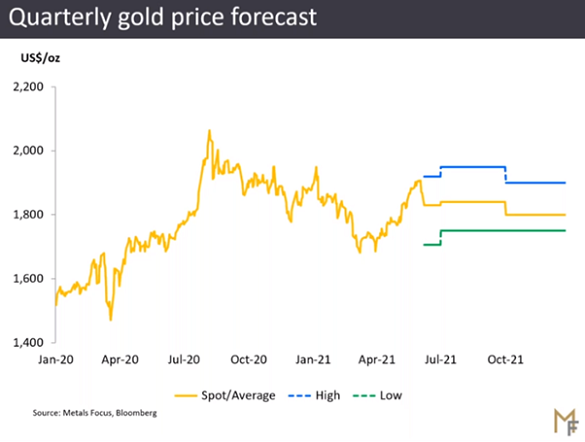 Gold prices have probably "already seen this year's low" at March's $1677 bottom, Meader went on, but Metals Focus also isn't expecting to revisit the highs of last summer until 2022.
"While we expect real yields [on government bonds] to stay low," Meader went on, "it's hard to see a further significant drop this year.
"There could be modest US Dollar weakness, and that's certainly built into our forecast. But we're not of the view that inflation will become a sustained problem.
"Even so, transitory inflation creates financial risk, and that will likely cool any eagerness to sell gold in 2021. So too do today's historically high Price/Earnings ratios in the stock market."
Global stock markets rose to yet more fresh all-time highs on Tuesday, adding some 0.5% to European equities after a late jump in New York trading took the MSCI World Index to its 6th new record of the last fortnight.
The US Dollar meantime ticked higher on the FX market to reach a new 1-month high on its index against the world's other major currencies.
Ahead of tomorrow's monetary policy decision from the US Federal Reserve – widely expected to leave both interest rates at a record low and QE asset purchases at a record high – real yields on US government debt eased lower on Tuesday, dropping to minus 0.89% per annum on 10-year TIPS.
That was a series record low when first reached in July last year, beaten by a drop below minus 1.00% in August and then January.
US consumers expect inflation to reach 4.0% in May 2021, a survey from the New York Fed said Monday, the highest such forecast since the survey began 8 years ago.
Core inflation, excluding volatile food and fuel prices, last month hit the fastest annual pace in almost 3 decades at 3.8%.
US Fed interest rates are currently capped at 0.25% per year. The US central bank is also working to keep longer-term rates low by creating and spending $120 billion per month on US Treasury and mortgage-backed securities.