END_OF_DOCUMENT_TOKEN_TO_BE_REPLACED

GOLD PRICES held 1-week highs in London's wholesale market Thursday, trading 1.2% higher for the week so far after notes from the Federal Reserve's latest policy meeting showed US policy makers keen to keep Dollar interest rates lower for longer.
The US Dollar fell to 6-month lows against the Euro overnight, but rallied Thursday morning while commodity prices cut earlier gains to drift lower, as did major world stock markets, and gold touched $1239 per ounce.
US Treasury and most other major bond yields meantime fell as investors bought government debt. But Brazil's 10-year yield leapt 0.3 percentage points to 5.95% following news that a congressional committee advised impeachment proceedings should begin against current president Dilma Roussff for hiding the true size of her government's budget deficit.
"Headwinds restraining growth and holding down the neutral rate of interest [are] likely to subside only slowly," said the Fed meeting's minutes.
"Raising the target range [for Dollar interest rates] as soon as April would signal a sense of urgency [several committe members] did not think appropriate."
"Like the Grand Old Duke of York, the Fed marched us up to the top of the hill and then down again," writes 'perma-bear' strategist Albert Edwards at French investment bank Societe Generale, saying it was the US stock market's sharp plunge after New Year which led to the Fed's "no change" decisions since finally raising from 0% at the last meeting of 2015.
"The minutes failed to bring clarity if a rate hike is due in June," says the commodities team at German financial services giant Commerzbank, "[but] Fed officials did signal a 'cautious go-slow strategy' [and] the gold price reversed some of its earlier decline."
"Positive fundamentals played out for gold on US Dollar weakness," says Swiss investment bank Credit Suisse, reviewing the first quarter – and upgrading its average 2016 price forecast by 10% to $1270 per ounce – "driving ETF buying and lifting the price."
"Silver lacks those fundamentals, but tracks gold upwards," the note adds, raising Credit Suisse's 2016 average silver price forecast 6% to $16.26 with a further 3% life for the 2017 outlook to $16.50.
Investor demand for shares in the giant SPDR Gold Trust rose as its price fell with the bullion market Wednesday, the 5th time in the last 7 trading days that the size of the largest gold ETF have moved in the opposite direction to gold prices.
Prior to that, the GLD had moved in opposition to gold prices only 35 times in the previous 100 sessions back to the start of November – the strongest connection since New Year 2009 saw the start of US quantitative easing and zero interest rates. 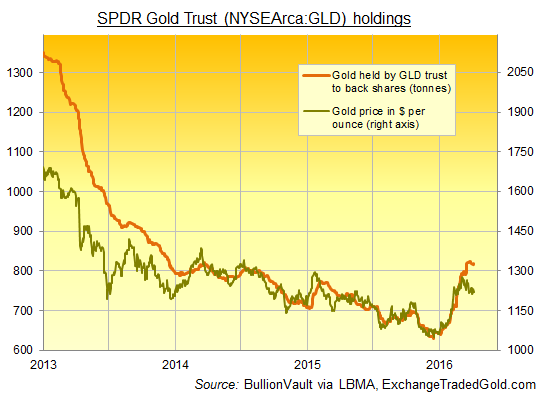 Silver prices meantime held Thursday at $15.23 per ounce, erasing all of last week's 1.1% drop.
The giant iShares Silver Trust (NYSEArca:SLV) ended Wednesday needing 10,411 tonnes of bullion to back its value – the most since the end of 2014.
Washington-based advocacy and trade association the Silver Institute says US sales of silver jewelry grew for the 7th year running in 2015, with retailers reporting 15% growth in the segment from 2014.