END_OF_DOCUMENT_TOKEN_TO_BE_REPLACED

The PRICE of GOLD fell sharply on Friday, erasing the last of 2022's prior gains for Dollar investors and briefly dipping below $1800 as the US currency surged to yet more 2-decade highs on the FX market after Federal Reserve policymakers said they will continue to hike interest rates – now with the backing of the White House – to try curbing the worst inflation since the early 1980s.
Ukraine meantime began prosecuting a Russian solider accused of killing civilians and Russia began prosecuting US basketball star Brittney Griner for alleged possession of cannabis while the Kremlin – reportedly suffering "significant" losses in a botched attempt to cross the Siversky Donets River – threatened "military-technical retaliation" against neighboring Finland for declaring its intention to join the Nato alliance.
China's anti-Covid lockdowns have sunk its export flows and knocked 20% off global shipping fees, the South China Morning Post reports.
New figures yesterday said GDP in the UK – the world's 5th largest national economy – joined the USA in showing a decline on the latest data.
"If you had perfect hindsight you'd go back, and it probably would have been better for us to have raised rates a little sooner," said Fed chairman Jerome Powell in an interview yesterday after taking overnight rates up to 1.0% in the face of 8.5% inflation last week.
"[A run of] 50 basis-point increases make sense," said New York Fed president John Williams to reporters a day earlier, adding that he expects a repeat of May's half-point hike – the first in 22 years – "at the next couple of meetings [because] we are removing accommodation pretty quickly."
"I agree with Powell," US President Joe Biden had announced on Wednesday, "that inflation is our top economic challenge right now.
"So the Fed should do its job and it will do its job. I'm convinced of that."
Heading for the steepest weekly loss in Dollars, Sterling and Euros since bullion dropped from early-March's Ukraine crisis peaks, the price of gold has diverged for major-economy investors as the US currency has extended its jump following this month's interest-rate hike. 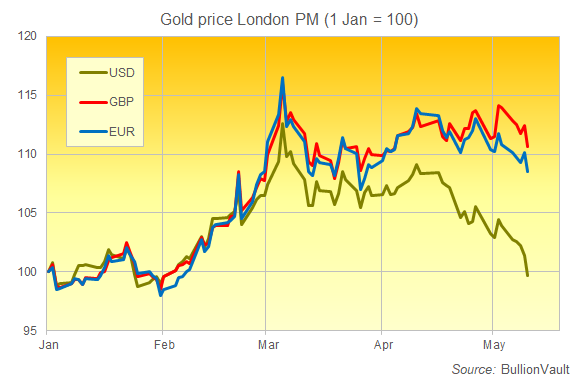 Trading back at New Year's Eve levels at $1800 per ounce, gold prices today fell near 6-week lows in Euro terms but only 1-week lows in Sterling at €1740 and £1495 respectively.
Gold demand in the metal's major Asian consumer markets also stayed weak, with prices in Shanghai trading just $2.60 per ounce above London against the typical average of $8.50, while a sharp price drop in India failed to revive household buying after the Rupee sank to fresh all-time lows against the US Dollar.
"Gold is clearly losing its safe-haven store value to a surging Dollar," LiveMint quotes Pritam Patnaik, head of commodities at brokerage Axis Securities.
"A recessionary economic trend, ratcheting up of the geopolitical situation, and a softer bond market should have greatly helped gold bulls' cause, but the exact reverse has taken place."
Global stock markets rose Friday for only the 5th session out of 10 so far in May, rallying from their lowest value since December 2020 on the MSCI World Index.
Major government bond prices fell back after Thursday's rally, edging longer-term borrowing costs up towards last week's multi-year highs as commodities jumped once more, taking European Brent crude oil above $110 per barrel.
Alongside the rebound in longer-term rates, betting on the US Federal Reserve hiking its overnight target to 3.0% or above by the end of 2022 bounced on Friday, taking the market-implied odds up to 56% from below 39% on Thursday.
Those were the lowest odds since 20 April – eve of the Fed chief Powell confirming that he intended to raise interest rates by half-a-point at this month's meeting, the steepest such move since the Tech Stock Crash of spring 2000.
That week saw gold priced in the Dollar try but fail to regain the $2000 mark, with speculators trading Comex gold futures and options slashing their bullish betting on gold prices by more than 1/3rd since then.
Gold ETF investors have also now begun cutting their positions, with the giant SPDR Gold Trust (NYSEArca: GLD) shrinking another 0.5% yesterday to reach its smallest size since early March as the smaller iShares product (NYSEArca: IAU) saw 0.1% liquidation to reach its smallest size in 3 weeks.