END_OF_DOCUMENT_TOKEN_TO_BE_REPLACED

The GOLD PRICE leapt lunchtime Friday in London, jumping to 12-week highs above $1840 per ounce after new US data said the world's biggest economy added barely a quarter as many jobs in April as analysts expected.
Silver also jumped, touching new 10-week highs near $27.70 before retreating by 30 cents as the Dollar gold price eased back below $1830, cutting its weekly rise to 3.3%.
Wednesday's private-sector estimate from ADP Payrolls had said that the US added 742,000 jobs last month, the 4th largest number on its records.
But total non-farm payrolls rose by only 266,000 the Bureau of Labor Statistics said Friday, leaving the jobless rate at 6.1% and missing Wall Street's consensus forecast by 73%.
The US Dollar erased the week's earlier rally from 6-week lows, but gold prices still jumped decisively in terms of all other major currencies, hitting early-Feb' levels above €1515 and £1320 for Euro and UK investors. 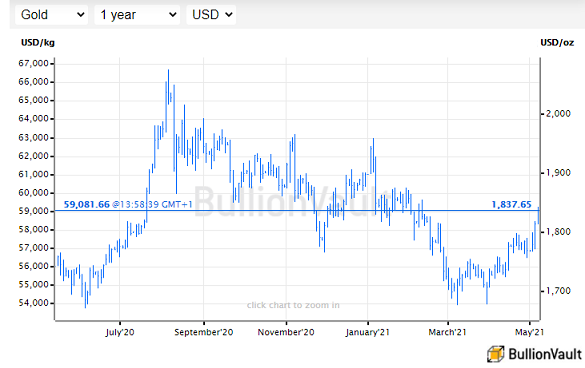 "Perhaps it's now time for a breather," said brokerage StoneX's analyst Rhona O'Connell ahead of today's NFP report, noting that gold looked "overbought on both Bollinger and Relative strength considerations.
"Yesterday [however] seems to have seen something of a sea-change, with gold rallying hard and the Dollar falling [after] at least four Federal Reserve leaders spoke publicly" about looking past rising inflation fears and leaving zero rates and record QE unchanged, "including former hawks such as Loretta Mester from Cleveland."
That suggests "a concerted campaign to drive the message home" O'Connell says.
Inflation forecasts implied by US bond market prices eased further back on Friday from this week's new 8-year high near 2.5% per annum over the next decade.
But real interest rates, as shown by 10-year inflation-protected debt, also fell further, down to minus 0.91%, the lowest since mid-February and suggesting a loss of 8.7% in purchasing power for US bond holders between now and 2031.
Thursday's gold price jump saw little new interest in the biggest gold ETF investment products, with the SPDR Gold Trust (NYSEArca: GLD) unchanged in size while the smaller iShares fund (NYSEArca: IAU) shrank to head for its 7th consecutive weekly outflow.
Silver's largest ETF – the iShares Trust (NYSEArca: SLV) – grew by 0.2%, its first expansion since 23 April.
Trading in Comex gold and silver derivatives leapt in contrast, both surging by almost 60% from Wednesday's levels with gold's daily volume hitting its highest since early March.
Trading in the currency market now includes positions worth $40bn betting that the Fed will surprise the market by signalling a shock rise to interest rates at its annual Jackson Hole conference in August, Bloomberg reports – "the third-biggest of any Eurodollar options" strike prices for that period.
"Silly joke" crypto coin Doge meantime rallied on Friday after losing 25% from Wednesday's fresh all-time high, taking its market capitalization back up to $78 billion ahead of tomorrow night's appearance on US comedy show SNL by Tesla and SpaceX founder and CEO Elon Musk, who began boosting the token in February and again last month.
"Cryptocurrency is promising," Musk tweeted overnight, "but please invest with caution!"