END_OF_DOCUMENT_TOKEN_TO_BE_REPLACED

GOLD PRICES rose Friday in London, cutting the weekly loss in US Dollar terms to 1.6% as stronger-than-expected US jobs data saw New York's stock market sink for a second day on fears of continued monetary tightening by the Federal Reserve.
After the Fed on Wednesday delivered its first half-point hike to overnight interest rates in 2 decades in a bid to slow inflation, global stock markets yesterday made their worst 1-day drop since October 2020 on the MSCI World Index, losing 2.8%.
The US central bank's key policy rate is now 1% per annum. Inflation is running at 8.5%.
Japan's stock market bucked the continued sell-off in equities on Friday as Tokyo re-opened after the Golden Week holidays, adding 0.7% for the day as Australia lost another 2.2%, Shanghai lost 2.5% and Hong Kong lost 3.8%, led by steep falls in e-commerce giant Alibaba and consumer tech brand Xiaomi.
Thursday's plunge in US equities saw the FAANG stocks behind Facebook, Amazon, Apple, Netflix and Google drop as a group towards their lowest weekly close since September 2020.
Falling bond prices on Friday saw comparable German Bund yields push upwards to new 7-year highs above 1.0%, but UK Gilt yields held below this week's new 6-year high of 2.0% per annum.
Trading at $1884 per ounce in US Dollar terms, gold priced in most major currencies headed for a weekly drop except for Swiss, Japanese and UK investors. 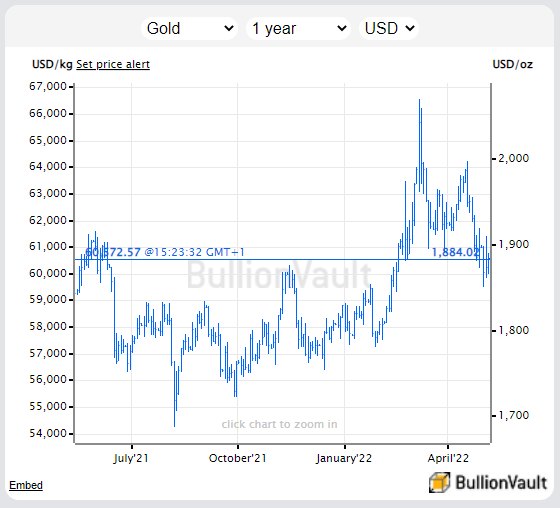 Wednesday's estimate of April's US jobs growth from the ADP Payrolls company came in 1/3rd below most analyst forecasts.
But today's first non-farm payrolls estimate from the Bureau of Labor Statistics said the world's No.1 economy added 428,000 jobs last month, beating Wall Street predictions and extending the strong run of post-pandemic expansion.
Natural gas prices slipped in Europe on Friday but Brent crude oil rose for a 2nd week running, up more than 5% from last Friday to $113 per barrel, after the Prime Minister of Hungary, Viktor Orban, said last night that the European Union's proposed ban on imports of Russia oil would equal "an atomic bomb" for his economy, which currently relies on Russian supplies.
With Ukraine now claiming that almost 25,000 Russian troops have died in the conflict, and the United Nations attempting to evacuate more civilians from the besieged Azovstal steel plant in Mariupol, Amnesty International today said there is "compelling evidence" of Russia committing war crimes during its occupation of central areas around Kyiv.
Euro gold prices ended the week above €1780 per ounce, down 1.9% from last Friday.
Gold priced in Sterling held above £1520 per ounce, little changed from last Friday's finish in London – the 2nd highest-ever weekly close for UK Pound investors.
Gold landed in China had earlier ended the week in Shanghai at a slight premium to London quotes after showing a discount – and signalling a surplus of domestic supply over demand in the precious metal's No.1 consumer market – since mid-April.
"Fundamentals supporting the Yuan's strength have waned lately," says China's state-affiliated Caixin news service, quoting Swiss investment bank UBS's chief local economist.
"China's monetary policy is expected to ease further amid significant downward pressure since end 2021, while the Fed has started to hike rates."
Silver prices meantime regained 30 cents after hitting their lowest in 3 months at $22.11 per ounce.