END_OF_DOCUMENT_TOKEN_TO_BE_REPLACED

GOLD PRICES leapt to a new 10-week high Thursday afternoon in London, jumping through $1800 per ounce amid fresh East-West "cold war" rhetoric as Western stock markets fell with longer-term bond yields, but inflation forecasts rose after the US Federal Reserve vowed to maintain its zero-rate and record-QE policies.
Staff from the new White House were today due to start trade talks with Beijing's Communist dictatorship for the first time, but "There is a general worry of miscalculation, and of incidents and accidents" over China's continued belligerence towards its neighbors, said Biden's top Asia official.
Beijing today "indefinitely suspended" co-operation talks with Canberra, blaming the Australian government's "cold war mindset" over China's Belt-and-Road Initiative for trade.
Also speaking in London, Washington's top diplomat today said the US will respond to what the G7 meeting of developed nations he attended this week called Russia's "irresponsible and destabilising behaviour" towards Ukraine.
Silver like gold jumped to its highest since late February, breaking through $27 per ounce for the 2nd time this week and adding 5.3% higher from last Friday's finish.
With Covid cases and deaths in India – the world's 2nd most populous nation – meantime setting fresh daily records, news that US President Joe Biden supports the World Trade Organization's call to suspend vaccine patents to reduce costs for poorer countries saw pharma and biotech share prices sink.
Longer-term borrowing costs fell once more, with 10-year US bond yields now erasing one-fourth of 2021's previous spike to the highest since the eve of the Covid Crisis early last year, dropping to 1.56%.
Inflation-protected bond yields fell faster, down to -0.93% on 10-year TIPS.
Together that put 10-year breakeven rates –the implied pace of inflation now forecast by bond-market trading – up at 2.49% per annum, the highest such "forecast" since April 2013.
US inflation has since averaged 1.8% on the Federal Reserve's preferred PCE measure. 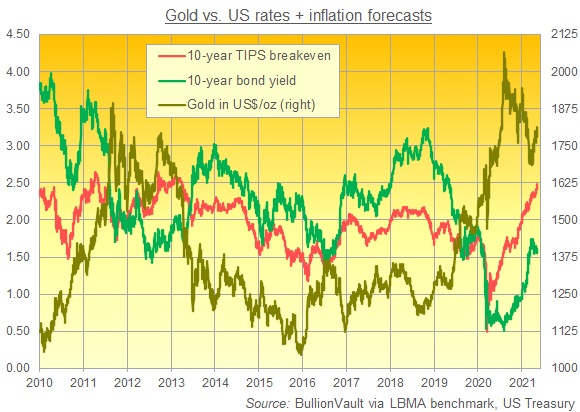 Gold prices touched $1813 per ounce just around the London PM benchmarking auction, up 2.6% for the week so far.
"I expect these upward [consumer and factory] price pressures to ease after the temporary supply bottlenecks are resolved," said Fed governor Michelle Bowman in a speech Wednesday.
"The risk that inflation remains persistently above our long-run target of 2% still appears small...I think we are currently on a good path, and our policy is in a good place."
"My view is that this acceleration in the rate of price increases is likely to prove temporary," agreed Boston Fed President Eric Rosengren in separate comments.
"Toilet paper and Clorox were in short supply at the outset of the pandemic...Many of the factors raising prices this spring are also likely to be similarly short-lived."
"The US Federal Reserve is continuing to push back here," Reuters quotes one broker, "[which] is good for gold because it's keeping yields lower."
The UK's Bank of England today forecast the fastest economic growth since WW2 but  kept its key interest rate at zero and left its £895bn target for QE bond purchases unchanged, only slowing its monthly pace.
Even so, the UK gold price in Pounds per ounce today jumped through £1300 for the 1st time since mid-February, up 2.0% for the week so far.
The Euro gold price also broke up through its nearest round number, rising above €1500 per ounce.
Pfizer's vaccine partner BioNtech today lost 15% in opening trade on the Frankfurt bourse, before rallying to a 6% loss for the day, while US stock indexes slipped further from last month's new all-time high.
After yesterday's private-sector ADP estimate of April's US jobs growth came in below Wall Street forecasts, albeit with the 4th highest jump on record, new data today said jobless benefit claims held firmer than analysts expected for last week.
The official Bureau of Labor Statistics' estimate for April is due out Friday.
"What is becoming clear from the [latest] US and China industrial numbers," says bullion-market analyst Rhona O'Connell at brokerage StoneX, "is that supply disruptions are undermining resurgent activity.
"So inflationary issues at present are exacerbated by supply constraints. Once these are ironed out then price increases should moderate again, especially given the unemployment levels."