END_OF_DOCUMENT_TOKEN_TO_BE_REPLACED

GOLD PRICES edge down Wednesday lunchtime after US ADP shows over 20 million people have lost their jobs writes Atsuko Whitehouse.
Automatic Data Processing (ADP) showed that 20.2 million private-sector jobs were lost in the US - the largest decline in ADP history. 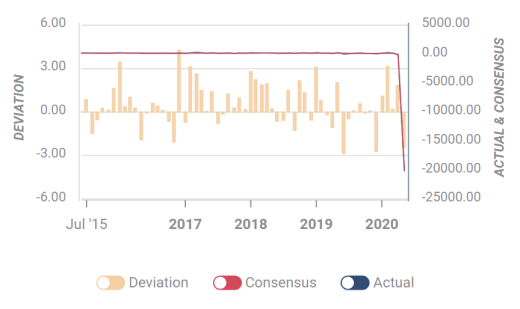 Source: ADP Employment Change by FXStreet
“Job losses of this scale are unprecedented. The total number of job losses for the month of April alone was more than double the total jobs lost during the Great Recession,” said Ahu Yildirmaz, co-head of the ADP Research Institute.
Non-farm payrolls this Friday is also expected to show 20 million workers losing their jobs and the unemployment rate forecasted to jump from 4.4% to 14%.
Spot gold fell 0.9% to $1690 per ounce as the US Dollar Index, a measure of the US currency’s value relative to a basket of top 6 currencies, rose for a fourth straight session to break the key barrier at 100.00.
There is "optimism about the outlook for economies as we start to move away from lockdown," said Michael McCarthy, chief strategist at the spread betting firm, CMC Markets.
"On the other side, we are seeing support for safe-haven yen and the US dollar is also holding up quite well. So, there clearly are different views about the outlook for the global economy."
On Tuesday, US President Donald Trump urged again China to be transparent about the origins of the novel coronavirus that has killed more than a quarter of a million people worldwide since it started in the Chinese city of Wuhan late last year.
Mr Trump also confirmed the White House coronavirus task force will be winding down, saying Americans should begin returning to their everyday lives even if it leads to more sickness and death from the pandemic.
Fed Vice Chairman Richard Clarida warned the economy will need more government support, but economy to rebound next quarter on the interview Tuesday.
In contrast, the European Commission on Wednesday estimated that GDP in the EU will contract 7.7% in 2020.
“The European Union is facing the deepest economic downturn in its history, which threatens the very future of the euro currency if the crisis is badly handled,” the bloc’s executive arm warned.
Gold prices for European clients dipped by 0.6% to €1563 per ounce as the Euro headed towards two-week lows against the dollar on weak PMI figures, which indicated a further drop in the Eurozone private sector economy as the Coronavirus continues to wreak havoc.
The gold price in the British Pound edged down by 0.3% at £1365 per ounce as the UK also saw a sharp fall in yesterday’s PMI data for the services sector and with the UK death toll passing Italy to be highest in Europe.
Gold prices on the Shanghai Gold Exchange, opened after the five-day national Labour Day holiday, continued to show a historic discount to London, but reducing to $37 per ounce on Wednesday after wholesale bullion in the metal’s No.1 consumer market eased the weekly average to $44 last week.
India, the world’s second biggest consumer of the precious metal, imported around 50 kilograms of gold in April, down from 110.18 tonnes a year ago, a government source said on Monday.
This is a 99.9% plunge year-on-year and the lowest in nearly three decades as air travel was banned and jewellery shops were closed amid a nationwide lockdown to curb the spread of coronavirus.
As for the other precious metals, silver prices declined 0.3% to $14.9 per ounce, while platinum lost 2% to $753.