END_OF_DOCUMENT_TOKEN_TO_BE_REPLACED

GOLD PRICES jumped on Thursday in London, rising through $1900 and €1800 per ounce and setting near record highs for UK Sterling investors after the Bank of England followed the US Fed in delivering what the markets took to be a 'dovish' rise in interest rates.
Raising overnight interest rates to 1.0% per annum – the highest since 2009 but 6 percentage points below the latest rate of CPI inflation – the Bank also announced that it will start reducing its holdings of corporate bonds from its 'quantitative easing' asset-purchase program in September.
With those holdings worth £20 billion alongside UK government debt of £847bn, this move to quantitative tightening "should not be taken as a signal regarding the design or timing of any potential future UK government bond sales" the Bank said.
The US Fed in contrast confirmed its QT plans in Wednesday's announcement, outlining a plan to let natural 'run off' from maturing bond holdings to shrink the central bank's balance sheet by more than $1 trillion per year.
But raising US overnight interest rates to 1.0% with a half-point hike instead of the 0.75 point rise expected by the futures market, Fed president Jerome Powell told reporters to expect a series of further half-point hikes ahead.
"I don't think if you were to compare it to other Fed meetings or Fed rhetoric over time," says Citigroup's chief economist, "that this was a dovish Fed.
"But when you compare it to some of the expectations of the market and some of the worries that were in the market, it was not as hawkish as some had feared."
Net of RPIX inflation, the Bank of England's key interest rate has now been negative without pause since the summer of 2008 in real terms.
Net of CPI inflation, the US Fed Funds rate turned positive for 12 months starting November 2018, but has now been below zero 75% of the time over the last 2 decades. 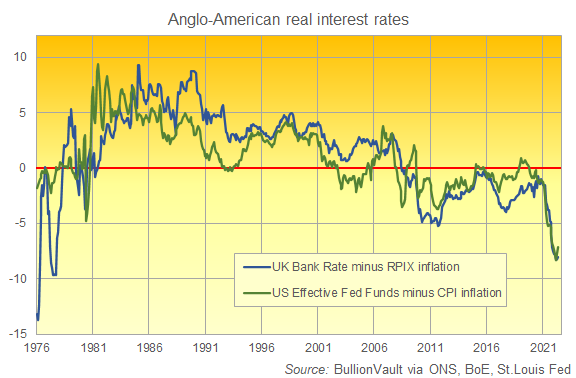 Asian stock markets fell after last night's Fed decision was followed by PMI survey data saying that China's services sector shrank amid April's anti-Covid lockdowns at the worst pace since the depths of the pandemic's historic shock in early 2020.
European stock markets rose despite German factory orders showing a near 5% monthly plunge for March.
New York equity futures pointed lower however after new data said US economic productivity sank in the first 3 months of 2022 thanks to labor costs soaring over 7% per year, the fastest since the deep recession of 1982.
The British Pound meantime sank on the FX market, hitting new 2022 lows against the Euro and the lowest against the US Dollar since June 2020.
That helped the UK gold price in Pounds per ounce to reach £1533, its highest since the record peak of early March driven by Russia's invasion of Ukraine.
Euro gold prices meantime rose back to last weekend's level above €1800 after the single currency gave back its 1-cent bounce from 5-year lows versus the Dollar made on the US Fed's statement and press conference overnight.
Longer-term US bond yields were little changed, but UK Gilt yields fell sharply from this week's 6-year highs above 2.0% per annum on 10-year debt, falling as low as 1.81% following the Bank of England's announcement.
Germany's 10-year borrowing costs also eased back as debt prices rose.