END_OF_DOCUMENT_TOKEN_TO_BE_REPLACED

GOLD PRICES held $10 per ounce higher for the week so far in London on Wednesday, but remained almost $20 below yesterday's test of 3-month highs after US Treasury Secretary Janet Yellen spooked financial markets by saying interest rates "may" have to rise.
Chair of US central bank the Federal Reserve from 2014-2018, Yellen said in a pre-recorded interview released Tuesday that the new Democrat White House's multi-trillion Covid and infrastructure stimulus " does involve a re-allocation of resources" away from the private sector towards government borrowing.
"And, you know, it may be that interest rates have to rise somewhat to make sure that our economy doesn't overheat, even though the additional spending is relatively small."
Gold prices had just fixed in London's benchmark auction at $1797.75 per ounce, nearly matching 21 April's 8-week high, before peaking within $1 of $1800 in spot trade.
Gold then sank 1.5% inside 2 hours as The Atlantic magazine broadcast Yellen's interview, dropping back to $1771 before rallying to $1782 today.
Data from independent benchmark administrators ICE say that both of gold's recent highs came on auction volume substantially above the latest monthly average (+27% on 21 April and +56% yesterday).
Gold's low in the mid-$1680s on 30 March was also made on heavy auction volume (+59% from the monthly average) but its 8 March fix around the same level had been quieter (-51%). 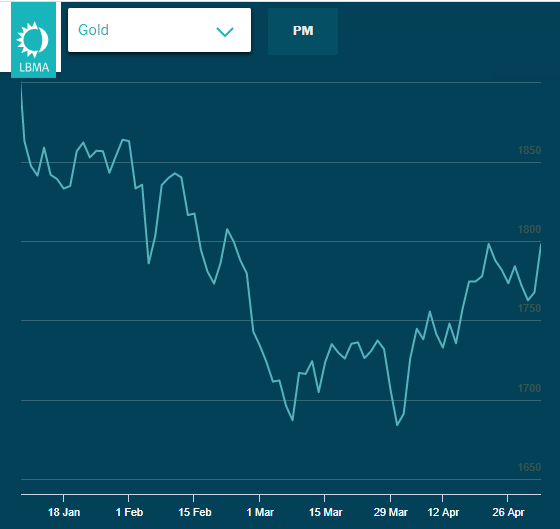 The tech-heavy Nasdaq index of US-listed shares meantime sank almost 3% yesterday before rallying to a 1.9% loss for the day, while crude oil dropped 1.3% at Tuesday's low.
Crude oil and Western stock markets rallied Wednesday however, back to 1-month and near April's fresh record highs respectively.
Bond prices were meantime little changed, knocking just 0.2% off iShares' high-yield corporate debt ETF (NYSEArca: HYG) on Tuesday and pushing inflation-adjusted 10-year Treasury yields down to fresh 10-week lows at minus 0.81% per annum.
"It's not something I'm predicting or recommending," Yellen then said about interest-rate rises in a separate online event hosted Tuesday by the Wall Street Journal.
"If anyone appreciates the independence of the Federal Reserve, I think that person is me," she went on, repeating comments she had made Sunday to NBC that "I don’t believe inflation will be an issue."
The size of Biden's spending plans "are substantially less" than the financial crisis' Asset Relief Program bail-out of 2008, Yellen told The Atlantic, and "We have proposed to pay for [spending with] higher taxes on the top 3/10ths of the top 1 percent...[and also] improve tax compliance," where she reported a $7 trillion shortfall between the law and what is being collected over a decade.
Despite Tuesday's price drop in bullion, giant gold-backed ETF the SPDR Trust (NYSEArca: GLD) ended the day unchanged in size after seeing its first inflow on Monday for 2 weeks.
Smaller competitor the iShares Gold Trust (NYSEArca: IAU) meantime expanded very slightly, growing by 0.06% with its first net inflow in almost a month.
Silver prices meantime held 50 cents lower on Wednesday after touching $27 per ounce yesterday and recording the highest London benchmark since 1 March.