END_OF_DOCUMENT_TOKEN_TO_BE_REPLACED

GOLD PRICES held onto this week's drop in London trade Friday, heading into the UK's long May Bank Holiday weekend at $1768 per ounce as Western stock markets also struggled and longer-term interest rates.
Nearly $15 per ounce lower from last Friday, gold priced in the Dollar still held on track for its first monthly gain of 2021 to date.
Global stock markets have meantime hit a run of fresh all-time highs, with the MSCI World Index adding 5.4% since March with its 5th monthly gain since November, a run matched by the US S&P500. 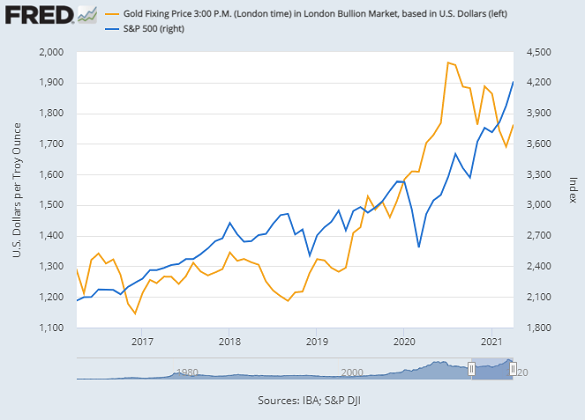 "This string of consecutively strong US economic data is weighing on gold," Reuters quotes one FX and commodities strategist, pointing to Thursday's stronger-than-expected US GDP rebound for Q1.
With prices rises as the end of April approaches, "Gold still remains bid," he adds, "it is just not a strong hand right now, because of month-end rebalancing" by portfolio managers.
"Wall Street seems to have gone cold on gold exchange-traded funds," adds a column at Forbes, noting that over the past 6 months – since Pfizer first announced successful trials of its Covid vaccine – gold-backed ETFs worldwide have seen investor outflows which "amounted to a whopping 307.8 metric tons worth $17.5 billion at recent prices.
"To find a larger sale you need to go back all the way 2013," it says – the year of gold's worst price plunge in 3 decades.
Having rallied in size last week for the first time in 15 weeks, the giant SPDR Gold Trust (NYSEArca: GLD) shrank by 0.5% on Thursday's GDP news to need 1,017 tonnes, the smallest since mid-April 2020.
Smaller competitor the iShares product (NYSEArca: IAU) also shrank again, heading for 0.2% weekly outflows with its 6th consecutive weekly reduction.
"In Asia today the metals looked soft early on but found some buying interest as the day progressed," says a trading note from Swiss refiners and finance group MKS Pamp.
The price gap between London and Shanghai gold fixed Friday around $10.65 per ounce despite a retreat in Chinese quotes.
World No.2 gold consumer India meantime reported yet more records for daily Covid infections and deaths, with official lockdowns shutting jewellers and extending domestic gold price drops to a 7th consecutive day.
Silver prices today rallied in London to hold flat for the week and heading for the first monthly gain of 2021, up $2 per ounce to $26.