END_OF_DOCUMENT_TOKEN_TO_BE_REPLACED

GOLD PRICES headed for their highest weekly close in US Dollar terms since November 2012 on Friday, trading above $1720 per ounce – and setting yet more new all-time records for Euro and UK investors – as world stock markets slipped once more with base metal prices amid the deepening Virus Crisis' economic depression.
After yesterday showed US claims for jobless benefits jumping by 26 million in just 5 weeks, new data Friday said orders for durable goods sank by 14.4% last month.
The MSCI World Index of listed businesses was on track for a 2.3% weekly drop, but crude oil extended its recovery from Monday's historic crash to negative prices on US contracts, reaching $17 per barrel of WTI, after major producer Kuwait said it has started cutting output and supplies to the world market as part of the Opec+ cartel's publicly agreed 10% cuts.
That saw the ratio of gold to US crude oil prices retreat to 101 barrels per ounce, down from Tuesday's fresh record peak near 190 after flipping negative thanks to Nymex front-month futures going below zero for the first time ever. 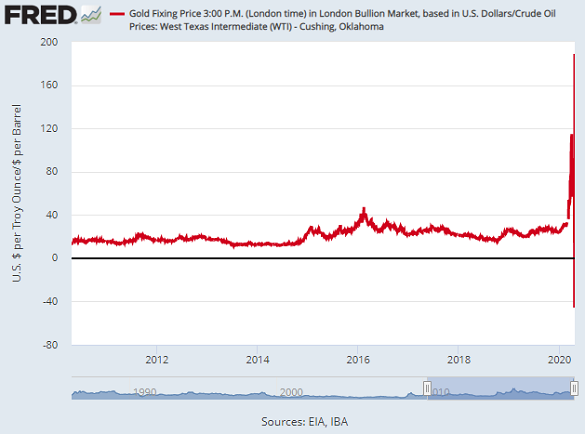 The collapse in energy demand – also put at 10% by analysts Rystad Energy – signals economic depression, reckons Mike McGlone, senior commodity strategist at Bloomberg Intelligence, and that suggests "unlimited upside [for gold prices] because central banks have unlimited firepower" to try and fight the recession.
"As economic output contracts sharply, fiscal outlays surge, and central bank balance sheets double, fiat currencies could come under pressure," agrees US financial giant Bank of America in a widely quoted note entitled " The Fed can't print gold."
"Give some kudos to Bank of America for coming up with such a catchy headline," says one London bullion desk in a note to client. "They see gold at $3,000 in 18 months and...I can agree broadly with their line of thinking as we are entering a new era of financial largesse worldwide.
"The need for long-term capital preservation will be acute."
Looking at industrial metals, "We remain bearish for the medium term," says Rhona O'Connell at brokers INTL FCStone, noting a little strength in copper prices against nickel and tin plus a "woeful demand outlook" for aluminum.
Warning of a "developing" surplus in nickel but a more "balanced" market for copper, major Russian miner Nornickel (MCX: GMKN) said this week it believes the surplus of platinum supply over demand will continue in 2020, while sister metal palladium – driven to record highs across last year as Chinese automakers scrambled to book deliveries ahead of new engine emission standards – will also see a "temporary surplus".
Palladium today recovered the $2000 level, a record high some 60% above start-2019 when first reached this New Year, but almost one-third below late-February's current all-time peak.
Platinum prices meantime headed for a small drop from last Friday's 6-week closing high, trading at $762 per ounce – some $200 above mid-March's sudden 18-year low – as No.1 producer nation South Africa eased some of its Covid-19 lockdown restrictions, removing the ban on sales of cigarettes but not yet on alcohol, after another week of food riots in some the country's most deprived areas.