END_OF_DOCUMENT_TOKEN_TO_BE_REPLACED

GOLD PRICES extended their pre-Easter weekend surge to set new 7-year US Dollar highs and fresh all-time records in Euro terms in London trade Tuesday, reaching $1727 and €1580 per ounce respectively as world stock markets pushed higher following last week's dramatic new phase in central-bank and government stimulus to offset the Covid shutdown recession.
US and major European government bond prices rose, edging longer-term interest rates lower, but commodities struggled, with crude oil prices falling despite the Opec cartel agreeing steep cuts to global output with Russia, Mexico and the US, where shale-oil producers face bankruptcy and asset seizure by bank lenders.
Thursday first saw the US Federal Reserve launch $2.3 trillion of new lending and asset purchases "to support the economy", while EU finance ministers then agreed a €540bn package ($592bn) of aid on top of their domestic national stimulus.
Washington's government spending will outrun its 2020 revenues by a record $3.8 trillion says self-declared "spending watchdog" the Committee for a Responsible Federal Budget (CRFB) – "a staggering 18.7% of US economic output...nearly quadruple" the previous forecast deficit.
The UK gold price in Pounds per ounce meantime held above £1370 on Tuesday – barely £20 off late-February's record spike – after the government's official forecasting agency said the world's 5th largest national economy could see GDP shrink 35% by June from a year earlier, with the jobless rate surging by 2 million people.
UK mortgage lenders have already agreed "payment holidays" of up to 3 months for 1-in-9 current home-loan customers.
"Covid-19's deflationary effect has been a headwind for gold," says Swiss banking giant and bullion market-maker UBS, "but this trend should reverse in [the second-half of 2020] as policy responses by governments and central banks gather traction."
Most notably, and "led by Fed easing," UBS goes on, "we now expect real US interest rates to dip deeper into negative territory and perhaps even test the post-[global financial crisis] lows."
Adjusted by inflation expectations, the real rates offered by 5- and 10-year US Treasury debt show a strongly negative correlation with Dollar gold prices, meaning that gold tends to rise when real bond yields fall and giving a typical r-squared of 44% and 41% respectively on a rolling 52-week basis. 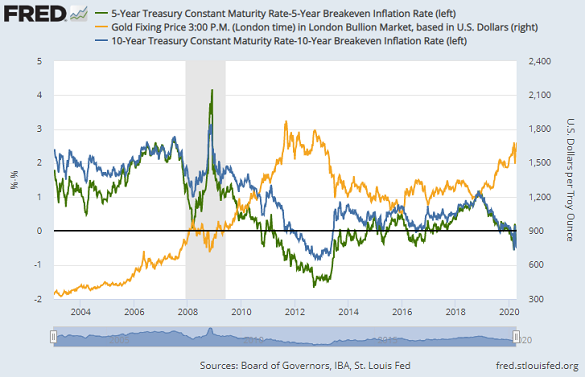 Adjusted by market-based 'break-even' inflation forecasts, 10-year US Treasury yields ended last week at -0.50%, down from +0.15% at the turn of the year but still above the lows of -0.80% reached in late 2012.
Real 5-year yields ended last week at -0.49%, down from 0.04% at the turn of this year but markedly above the lows of -1.60% reached in mid-2012.
Raising its longer-term gold price to $1800 per ounce, "The forces behind a potential debasement of the US Dollar have intensified," says UBS, "[because] for us, this is the Fed throwing everything and the kitchen sink into the economy.
"The two most important determinants of the gold price are real US interest rates and expectations for the purchasing power of the US Dollar, both inverse relationships. We reiterate our negative views on both at this point."
Up to $750bn of the US Fed's new QE will go to corporate borrowers through the bond market, including high-risk high-yield debt via direct Fed purchases of stock-market traded ETF trust funds such as iShares' iBoxx High Yield product (NYSEARCA: HYG).
Making its sharpest jump in a decade on Thursday's news, HYG holdings include debt from taxi-app Uber (NYSE: UBER), telecoms firm Sprint ( bought out by T-Mobile at the start of this month) and entrepreneur Elon Musk's electric-vehicle manufacturer Tesla (Nasdaq: TSLA).
The Fed's move came after US corporations raised a record weekly sum of $110bn in new debt, rushing to sell bonds as "they desperately need cash," according to one dealmaker, "and they don't want to have to go to lines of credit if they don't have to."
Thursday's aid package from Brussels meantime ended weeks of wrangling between Eurogroup finance ministers and paves the way for joint "coronavirus bonds".
"With this package we will help countries in need in the short term while also building resilient economies in the long-term," said the last hold-out, Dutch finance minister Wopke Hoekstra, after agreeing to the EU package.
"This is a powerful and sensible sign of European solidarity."
While European markets stayed shut Monday for the long Easter weekend, New York-listed gold-backed ETF product the SPDR Gold Trust (NYSEArca: GLD) saw heavy inflows take the quantity of bullion needed to support its value above 1,000 tonnes for the first time in 7 years.
Gold prices in Shanghai, in contrast, today held $50 below comparable London quotes, the widest-ever discount for bullion landed in China – the metal's No.1 consumer nation – where re-opened shopping malls remain deserted as people remain in lockdown or avoid crowds after Beijing's communist dictatorship said the first wave of the novel coronavirus has passed.