END_OF_DOCUMENT_TOKEN_TO_BE_REPLACED

GOLD PRICES steadied above 1-week lows in Dollar terms and rose in Euros on Wednesday as global stock markets fell hard for a 2nd day after a senior and formerly 'dovish' US central bank official said the Federal Reserve is about to hike rates and start reversing quantitative easing in a bid to cool inflation running at 4-decade highs.
The EuroStoxx 600 index lost 1.9% as New York opened 1.1% lower amid reports of fresh attacks on Ukrainian civilians by Russian troops, this time in the 'disputed' eastern Donbass region.
"Poor people are the chief sufferers of inflation," said Fed governor Lael Brainard in a webcast speech Tuesday, quoting 1970s' Fed chairman Arthur Burns.
"Getting inflation down is our most important task [and] the Committee will continue tightening monetary policy" faster than either the Fed has projected or markets currently expect, she went on, including "starting to reduce the balance sheet [of QE bond purchases] considerably more rapidly than in the previous recovery."
Bond prices slumped on Brainard's comments, driving longer-term interest up to fresh multi-year highs worldwide and knocking 1.1% off the MSCI World Index of global stock markets.
The Bloomberg Aggregate Global Bond index "fell to 99.9," says bullion-market analyst Rhona O'Connell at brokerage StoneX, "the first time since [the Lehmans' crisis of] 2008 that it has been at a discount to fair value."
But if the Fed is to succeed in curbing inflation, "It'll have to inflict more losses on stock and bond investors than it has so far," says former New York Fed president William Dudley.
"Investors should pay closer attention to what Powell has said: Financial conditions need to tighten." 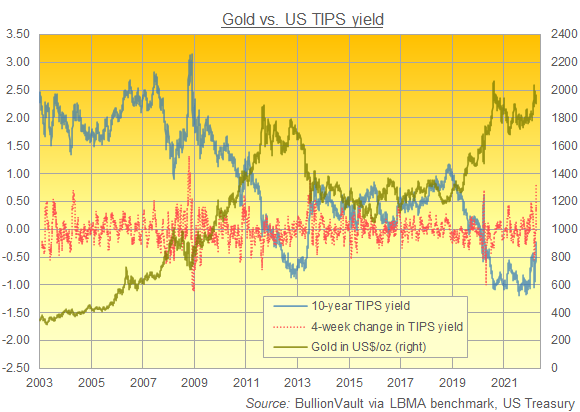 "We're seeing a new peak in US real yields and that's just keeping the gold market fairly locked in a range," says one spread-betting bookmakers' analysis team, pointing to the rate offered by inflation-protected securities.
"In real terms, [US bond] yields are still negative once we discount break evens," agrees another.
"I think that's why gold hasn't fallen more significantly, but if this sort of repricing for a more hawkish Fed continues and we do get positive real rates, I think gold is going to look quite unattractive."
Over the last 4 weeks, the 10-year TIPS yield has risen by 0.81 percentage points to minus 0.23% per annum, its fastest 1-month rise since late-June 2013 marked the bottom of that spring's historic crash in gold prices.
Gold prices overnight touched $1915 per ounce, down $155 from 8 March's near-record high, before rallying $10 in London trade Wednesday.
"Markets bet on sharpest pace of Fed tightening since 1994," says a headline at Bloomberg.
But faster even than the Fed's projected rate hiking has been the switch in speculative and investor expectations for the US central bank to raise hard and raise often in 2022.
Early March's consensus – that the Fed would end 2022 only at 2.00% or below – was given odds of 9-in-10 this time last month, according to trading data compiled by the CME derivatives exchange.
That betting has shrunk to zero, while today's consensus bet – that the Fed's key rate will end 2022 between 2.50% and 3.00% – saw zero chance as recently as 11 March.
It's now seen as a better than 2-in-3 shot, with a further 1-in-10 chance put on Fed rates ending 2022 at a ceiling of 3.25% or above.
Gold priced in Euros meantime rose Wednesday towards 1-week highs above €1765 while the UK gold price in Pounds per ounce held unchanged for the week so far around £1473.