END_OF_DOCUMENT_TOKEN_TO_BE_REPLACED

GOLD PRICES sank Tuesday, dropping through $1700 per ounce as the giant GLD ETF marked its worst quarterly run of investor outflows since the crash of spring 2013 and government bond prices fell hard, driving longer-term borrowing costs up to new pre-pandemic highs ahead of new US president Joe Biden unveiling what rumors say could be $4 trillion of infrastructure spending tomorrow.
To pay for the Democrat White House's new plans, "Business groups and lawmakers on both sides of the [political] aisle have been pushing Biden to raise US fuel taxes, some of the lowest in the world, for the first time since 1993," says Reuters.
"But the White House has rejected those ideas [as] politically risky [and] instead Biden is expected to propose the biggest federal tax increase in decades."
With investor demand for new US Treasury debt already fading in the face of Biden's $1.9 trillion Covid relief package, bond prices fell sharply on Tuesday, driving Washington's 10-year borrowing cost up to 1.75% per annum, the highest since New Year 2020.
Gold priced in the Dollar was then trading at $1557 per ounce.
Today gold fell to $1680, down $50 for the week so far to flirt with its  cheapest since April last year, down almost $400 per ounce from August's record high.
Inflation forecasts in the US bond market meantime reached new 8-year highs at the start of Tuesday's New York, hitting 2.37% on 10-year breakeven rates.
But the yield offered by 10-year Treasury bonds has risen faster since lagging that inflation forecast by a multi-decade margin when gold prices peaked above $2000 per ounce last summer, rising by 1.2 percentage points as the breakeven rate rose 0.7 points. 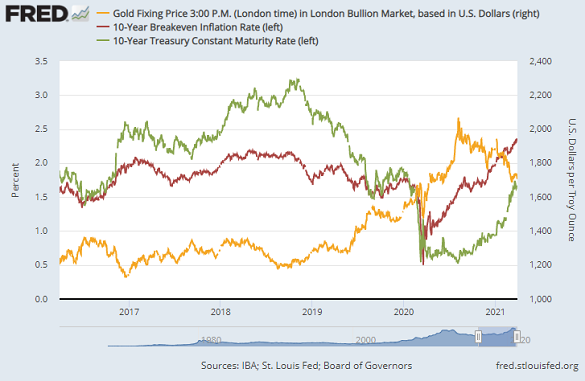 Silver prices fell more dramatically than gold's 3.0% loss since the weekend, dropping 4.1% from Friday's London benchmarking to near $24 per ounce – a level not seen since mid-December.
Platinum also slipped, down 2.3% from Friday but holding $20 above last Thursday's 2-week low of $1145.
"The march to electrification [of passenger vehicles] continues apace," says chief metals analyst Rhona O'Connell at brokerage StoneX, "[and] this favours platinum over palladium for the longer term" thanks to its use in hydrogen fuel-cell power generation and because demand for diesel-engine autocatalysts – formerly the No.1 source of platinum demand – has already suffered a steep drop which gasoline autocats using palladium will hit around 2030.
As for gold, the metal is "back into its downtrend and...veering towards oversold," O'Connell says, "but constrained by overhead resistance from the major moving averages with 10-day and 20-day at $1729 and $1722 respectively."
Giant gold-backed ETF trust fund the SPDR product (NYSEArca: GLD) yesterday saw only its 3rd net daily inflow of March, keeping its size over 5.0% below last month's finish.
On a quarterly basis, this caps a run of 39 net liquidation days over the last 59 trading sessions for the GLD, its worst since Q2 2013 – the worst 3-month price crash for gold since the start of the 1980s.
"That ETF investors are selling so consistently now suggests that further unloading is in the pipeline," said a column on Bloomberg's Terminal yesterday.
"Funds have a lot left to unload" after making record inflows to gold ETFs during 2020.