END_OF_DOCUMENT_TOKEN_TO_BE_REPLACED

GOLD PRICES jumped Monday, reaching 3-session highs above $1525 per ounce as government bond prices rose but world stock markets and commodities fell yet again after the US Federal Reserve made its 3rd unscheduled emergency policy change of March 2020 so far, aimed at "supporting the economy" amid the Covid-19 shutdown, writes Atsuko Whitehouse at BullionVault.
Today's Fed move to buy Treasury and mortgage-backed debt in unlimited quantities came after lawmakers failed to reach agreement on Donald Trump's proposed $1 trillion stimulus package over the weekend.
"We'll see what happens. I think we'll get there," the President said Sunday.
"We have to help the worker. We have to save the companies."
Gold surged 1.5% on the Fed's latest monetary stimulus, while the Dollar index – a measure of the US currency's value versus its major peers on the foreign exchange market – declined 0.9% from last week's new 3-year high.
Silver rose towards Friday's high near $13 per ounce, down by one-third from this time last month.
Fellow industrial precious-metal platinum added $10 per ounce from its weekend level – the lowest since 2003 at $613 per ounce.
"The main driver behind gold's recent weakness has been the 'dash for cash'," reckons derivatives platform Saxo Bank's commodity strategist Ole Hansen.
"That move was strengthened by the elevated leveraged positions that had been built up in gold during the past few months." 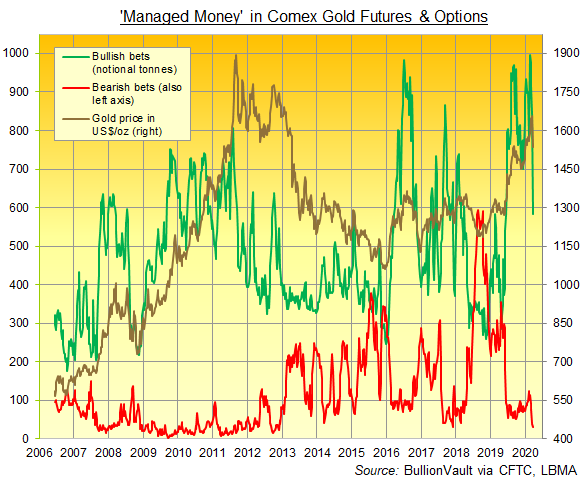 Latest data from US regulator the CFTC show that hedge funds and other leveraged speculators in Comex gold futures and options cut their bullish betting as a group for the 3rd week in a row in the week-ending last Tuesday.
Dollar gold prices that day slipped to their lowest in 4 months as both the US Fed and the Bank of Japan held emergency meetings and announced further rate cuts, plus new QE stimulus to try combating the coronavirus shock to global financial markets.
Overall, the Managed Money category's net long position as a group in Comex gold futures and options have now fallen 30% from the new record peak reached at the end of February.
Such a quick pace of retrenchment only happened twice before, first in March 2007 and then July 2007, just before the then-worsening US subprime mortgage collapse triggered a credit crunch in global money markets.
Back in Monday's action, the price of US Treasury bonds jumped following the Fed's announcement, making unlimited the previous plan to buy $500 billion in US Treasury debt and at least $200bn in agency mortgaged-backed securities.
That pushed the yield offered to new buyers of Washington's 10-year debt below 0.7% per annum.
"The Fed has attempted to fill the void created by paralysed fiscal policy," says one economist to the Financial Times.
Gold prices in UK Pounds per ounce meantime rose 1.9% to £1310 – a new all-time record high – as Sterling suffered heavy losses against both the US Dollar and the Euro following the UK Treasury and Bank of England's coordinated stimulus pledges to fight the Covid-19 crisis, spurring concerns over the world No.5 economy's worsening current account deficit with the rest of the globe.
Euro gold prices edged up 0.6% to €1408 per ounce as the heads of the French, Italian and Portuguese national central banks called on Eurozone finance ministers to launch a coordinated rescue package for nations hit hardest by the pandemic.
Italy saw its death toll from the coronavirus surpass 5,400 on Sunday while the number of fatalities in Spain rose by 30% to reach above 2,000.
Germany, where more than 23,000 people have tested positive, banned all public gatherings of more than two people.