END_OF_DOCUMENT_TOKEN_TO_BE_REPLACED

GOLD PRICES steadied around 1-week highs in London trade Wednesday, rising above $1720 per ounce even as global stock markets extended their bull run but government bond prices fell yet again, driving longer-term interest rates higher before reversing course as New York opened.
The sell-off in sovereign bonds is being driven by speculative betting that the price fall will continue, says the Wall Street Journal, calling the borrowing and short-selling of 10-year US Treasury bonds a "crowded trade".
Now rallying almost $45 from last Friday's 9-month low in Dollar terms, the gold price rebounded less steeply against Euros and Sterling on Wednesday, reaching €1444 and £1235 per ounce as the US currency retreated from its recent 4-month highs on the FX market.
Major government borrowing costs rose across the board after slipping yesterday from multi-year highs.
Monday saw the 10-year US Treasury yield settle above 1.59% per annum, its highest level in 13 months and more than 3 times the rate of exactly 1 year ago, when it plunged to what remains a new all-time historic low amid the Covid Crash across financial markets.
That is the fastest 1-year percentage jump on record. 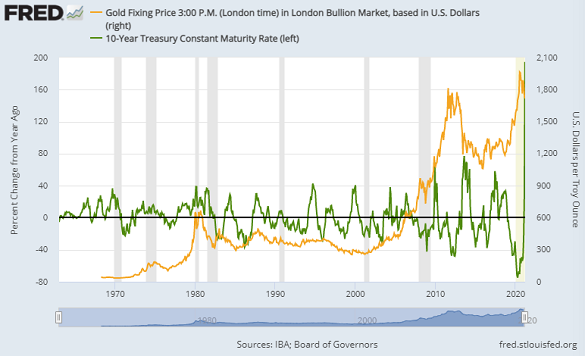 "The volatility in the yield on the 10-year US Treasury note has been caused by speculators selling short in anticipation of a fall in the price," says a column in Japan's Nikkei newspaper.
"The cost of borrowing [government debt] securities has skyrocketed in the past few days as the market has been under enormous pressure," says strategist Gennadiy Goldberg at brokerage T.D.Securities.
Hedge funds and other traders are paying up to 4% per annum to borrow 10-year Treasurys in the repurchase market (aka 'repo') – bonds which they then sell as a speculation that the price will fall, the WSJ reports.
"If the yield pull-back [from Tuesday] can hold," says the precious-metals team at French bank and London bullion market-maker BNP Paribas, "the fair-value price of gold will slowly improve. But we are not there yet. For now, the gold price trend is bearish.
"The silver lining in this...is that it mostly involve long liquidation from ETFs [rather than] trend-followers via Comex futures, [who are] not really interested in putting on outright short positions."
Looking at positioning data from US regulator the CFTC, the gross short bet held by Managed Money accounts in Comex futures has "barely changed in the past year" says BNP.
"But that trend could reverse easily and the gross short position will need to be watched."
With the US 10-year yield flipping around 1.56% on Wednesday, borrowing costs for European governments fell back after a rebound from yesterday's fall.
That took Germany's 10-year Bund yield back down to minus 0.32% per annum after spiking 12 basis points higher to the least negative since New Year 2020 last week.
Ahead of tomorrow's meeting of the European Central Bank, activists from environmental charity Greenpeace landed by paraglider on top of the ECB's press center next to the Main River in Frankfurt on Wednesday and unfurled a banner demanding that the 19-nation central bank "stop funding climate killers" – a subject the ECB is due to report on in September.
By far the largest source of funds across the 450-million citizen European Union, the ECB's €1.8 trillion of lending to banks ($2.1bn) "is not only at odds with democratically defined goals of the Paris Agreement and the EU's Green Deal, but it also actively underpins financial market failures and reinforces the carbon lock-in," said the New Economics Foundation think tank on Tuesday.
Climate change was last week added to the Bank of England's list of priorities when it sets monetary policy by UK finance minister Rishi Sunak, on top of economic growth and targeting 2.0% annual inflation in consumer prices.
The world's first inflation-targeting central bank, the Reserve Bank of New Zealand, will not forget its 2.0% target – first set in 1992 – after the center-left Labour Government of Jacinda Ardern added house prices to its list of considerations, RBNZ governor Adrian Orr said last Thursday.