END_OF_DOCUMENT_TOKEN_TO_BE_REPLACED

GOLD PRICES rallied over $35 per ounce from yesterday's 11-month low against the US Dollar in Asian and London trade Tuesday, reaching $1715 as Western government bonds also rallied across the board, pulling longer-term interest rates down from their sudden multi-year highs, despite this week's heavy issuance of new US debt to help fund its Covid stimulus deficit spending.
Ten-year US Treasury yields fell to 1.53% per annum as sovereign debt prices rose, down 6 basis points from Monday's 13-month high.
Silver also rebounded, outpacing the rally in gold prices to hit $25.93 per ounce and adding over a Dollar from Friday's 5-week low.
Platinum prices jumped to $1167, more than halving last week's loss but trading some 13.0% below last month's spike to 2014 levels.
European stock markets rose again, taking the EuroStoxx 600 index back up to last month's 1-year high, but crude oil prices retreated from their 1-year highs as base metals fell hard, with nickel losing 2.6% after suffering its worst week in 10 years on news of a Chinese smelting deal which could dramatically boost supplies for electric batteries.
Shares in electric-car maker Tesla have meantime lost one-third of its value from January's record high, Reuters notes, the 3rd such plunge of the last 12 months.
Yesterday's 2.5% drop in the Nasdaq 100 took the tech-heavy index of US-listed corporations more than one-tenth below last month's fresh all-time high. 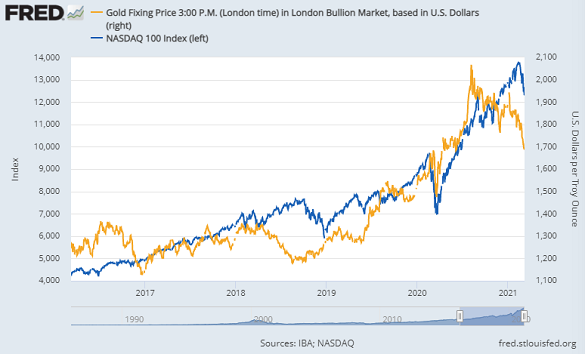 "Higher rates have put a ceiling on runaway tech stocks," the South China Morning Post quotes one Hong Kong stock broker.
"I am bearish on the bond market" – meaning longer-term interest rates will continue to rise – Bloomberg quotes a US hedge fund advisory.
"We just have too much stimulus coming into the system. It's going to combine the [post-Covid] growth with a very rapid acceleration in inflation."
The largest precious-metal ETF products shrank again Monday, with the GLD gold trust seeing net liquidation of 0.6%, the IAU 0.2%, and the SLV silver trust shrinking by 0.5%.
"Gold price action remains susceptible to a further test lower," says a trading note from Swiss refiners and finance group MKS Pamp, "as Dollar headwinds and firmer yields weigh upon the metal.
" Gold ETF outflows continue [but] interest around $1690 should act as a near-term pivot...while downside targets extend through to $1650.
"Much like gold, silver remains susceptible to a test lower, with targets extending to the 200 day-moving-average at $24.20."
The fall in global prices continued to outstrip prices in China – gold's No.1 consumer market – where the Shanghai Gold Exchange's benchmark price today showed a $14 per ounce premium to London spot despite falling to the lowest Yuan value in 12 months at ¥355 per gram.
Up nearly $5 from Monday, that premium offered the largest incentive for new gold imports to China since mid-August 2019 according to data compiled by BullionVault.
"The caution coming from the Chinese Government over fiscal stimulus and the tone coming from the National People’s Congress have taken some of the heat out of the base metals markets," says chief analyst Rhona O'Connell at brokerage StoneX.
Losing another 2.6% so far Tuesday, copper prices have now retreated some 8% from late-February's near 10-year high, "exacerbated by the resumption of activity at domestic [Chinese] smelters after maintenance downtime and Chilean exports starting improve after poor weather conditions," O'Connell says.
But "in line with the goal of supporting growth," says the Fitch credit ratings agency's team in Hong Kong, "the government’s planned fiscal consolidation in 2021 will be more modest than we had previously anticipated," with the NPC's new budget looking to cut the annual deficit from "above 3.6%" in 2020 to 3.2% in 2021.
"China is increasingly shifting its attention from pandemic recovery to managing the economy in more normal conditions," reckons Bloomberg News' chief Asia economist Chang Shu.
The expected 'divergence' with Washington's stimulus policy is reflected in forecasts for the Yuan's currency value, now predicted to strengthen from 6.5 per Dollar to 6.35 by end-December in a survey of analysts.
With new US President Joe Biden's $1.9 trillion stimulus plan now approved by lawmakers, the US Treasury will today seek to raise $58 billion in 3-year bonds, with a further $38bn in 10-year debt set for auction Wednesday and then $24bn in 30-year debt Thursday.
Despite voicing concerns about the sell-off in US Treasury prices affecting Eurozone yields however, the European Central Bank actually slowed the pace of its bond purchases last week, buying less than €12bn net of redemptions under its Pandemic Emergency Purchase Programme (PEPP) thanks to what a spokesperson called "seasonality factors" in bonds reaching maturity.
The ECB meets Thursday, when Germany's 'hawkish' Jens Weidmann says he may consider calling for larger PEPP purchases to support bond prices and cap the rise in government borrowing costs.
GDP across the 19-nation Eurozone – the world's 2nd largest economic bloc – shrank by 6.2% in 2020, new data said Tuesday, less than the 6.8% plunge first reported.
Japan's economic recovery over the last 3 months of 2020 was today downgraded however, putting last year's GDP recession at 4.8% as a whole.
Japanese household spending then sank by 7.3% in January from December's level.