END_OF_DOCUMENT_TOKEN_TO_BE_REPLACED

GOLD PRICES sank back towards this week's new 8-month low in London trade Wednesday, erasing last night's $30 rally as the US Dollar rose alongside longer-term interest rates despite worse than expected jobs data from the world's No.1 economy.
With the official Bureau of Labor Statistics' estimate for February due out Friday, the private-sector ADP Payrolls provider said the USA added 117,000 jobs last month, missing analyst forecasts by one-third.
New York stock futures pointed lower, heading for their 4th day of losses in a week, but Treasury bonds also fell in price, driving 10-year borrowing costs up to 1.46% per annum – the highest since the eve of last March's Covid Chaos when reached last week.
Gold prices fell back to $1708 while silver also retreated after recovering last weekend's level to trade near 5-week lows at $26.20 per ounce.
So-called crypto-currency Bitcoin meantime rallied back above $50,000 having lost 26.1% of its Dollar value from last week's new all-time high.
"Gold is dead Peter. Move on," said celebrity billionaire, software entrepreneur, media and sports owner Mark Cuban on Twitter overnight to long-time anti-Bitcoin gold promoter Peter Schiff.
"What we are seeing built [with] crypto today is just proof of concept.
"As tech continues to get better/cheaper/faster there will be new applications and maybe even something that supersedes what we know as crypto today. But gold won't ever change. Which is why it will die as a [store of value]."
"That it was once used as money is no longer enough," agrees Bitcoin and precious-metals investor Dominic Frisby in the UK's MoneyWeek magazine.
"I still own gold – I always will...I'm a gold bug. But the trend is down. Unless gold can adapt itself to the realities of the digital economy, and thereby make itself alluring again, it will continue to lose relevance." 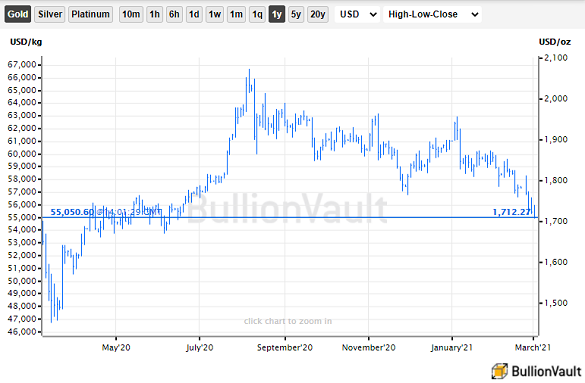 "We still think it feasible that the excess liquidity in the markets, with a considerable amount more to come, will keep gold at elevated levels for a good few months yet," says specialist analyst Rhona O'Connell at brokerage StoneX.
But looking at the broader financial markets, "We had thought that something similar to [2011-2013] would happen this time around," with money managers waiting until "the risks in the financial systems had worked their way through" before selling bonds and gold in "a clear-out [by] investors looking to be ahead of the game (which, of course, is the sensible place to be)."
The giant GLD gold-backed ETF yesterday expanded by 0.2%, its first net inflow of investor cash since 4 February following 6 weeks of liquidation.
Silver's giant SLV ETF shrank again however, extending its net liquidation for the 4th session running.
Here in the UK – where the world-leading roll-out of mass vaccinations is going " better than anyone was expecting" according to one epidemiologist advising the government – Finance Minister Rishi Sunak's new Budget today extended taxpayer support for the economy and raised business tax to help start paying down the country's record peacetime debt burden from 2023.
As a proportion of the UK's economic output, government borrowing will be nearer 17.0% in tax-year 2020-2021 than the 19.0% forecast before, said the Office for Budget Responsibility.
But the deficit will now total 10.3% of GDP in 2021-2022 rather than 7.4%, before falling to 4.5% – what would have been the highest since the global financial crisis of 2009-2013 – the following year.
"Just a few months ago," says an op-ed in London freesheet CityAM, "Chancellor Rishi Sunak had hoped that his spring budget would be an opportunity to move the economic agenda away from Covid-19, and back towards the government's 'levelling up' commitment.
"But the reality looks very different...[as] it is becoming increasingly clear that it could be some time before Covid-19 restrictions are removed entirely."
May's annual Platinum Week has now been cancelled for the second year running, an "extremely disappointing [but] inevitable" email to members from the London Platinum & Palladium Market said last week, announcing instead a virtual seminar on Tuesday 18 May.
The ongoing Covid pandemic mean that July's Tokyo Olympics – already postponed from 2020 – should be cancelled according to 58% of Japanese citizens surveyed by the Yomiuri newspaper.
Texas and Mississippi's Republican governors are in contrast lifting their states' rules demanding masks be worn in public and are moving to lift social restrictions despite the federal CDC disease control agency warning against complacency.