END_OF_DOCUMENT_TOKEN_TO_BE_REPLACED

GOLD PRICES rose as European stock markets sank and major-economy government bond prices jumped Tuesday on news of Russia hitting civilian buildings and housing in eastern Ukraine with missiles as a 40-mile long convoy of tanks nears the besieged capital Kyiv.
Betting on the US Fed hiking its key interest rate by half-a-percentage point from zero at this month's policy meeting has slumped amid Russia's invasion of Ukraine and now account for fewer than 1-in-18 positions tracked by the CME derivatives exchange's FedWatch tool.
That's down from more than 2-in-5 this time last week.
Longer-term US and European interest rates also sank Tuesday as bond prices jumped to 1-month highs, driving the yield on 10-year Treasury debt down to 1.75% per annum and erasing the positive yield offered by comparable German Bunds in February – the first non-negative yield offered by Berlin's 10-year debt since spring 2019.
The EuroStoxx 600 index meantime lost over 1%, while Russia's stock market remained shut for a 2nd day having lost 1/3rd of its value in a week and halved from last October's record high. 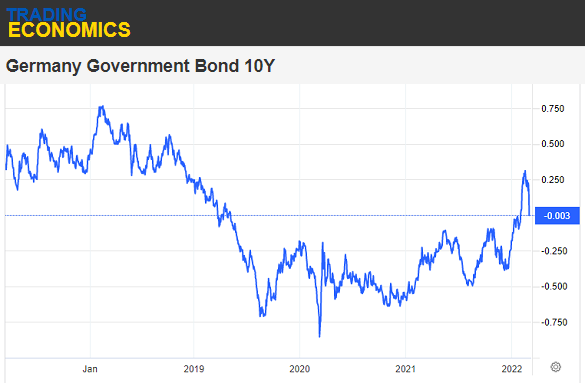 "We're seeing the sanctions starting to bite," Reuters quotes one derivatives analyst, pointing to today's $300 per ounce leap in palladium – of which Russia mines 45% of global supply each year – to 7-month highs above $2,700.
"Russian mining companies are examining alternative transport routes," reckons an analyst at German financial services group Commerzbank.
"However, we believe that the sanctions and associated restrictions will make it difficult to charter planes to export materials."
While the US further tightened its sanctions against the Central Bank of Russia on Monday, "the latest measures did include a carve-out that authorizes energy-related transactions with the bank," notes the Associated Press.
Russia's oil and gas exports last year averaged $650m per day.
Oil-rich Canada should ban imports of Russian crude, Prime Minister Justin Trudeau said Monday.
"The penalties also do not impact Russia's gold stockpile," the AP goes on, "which Putin has been accumulating for several years."
Gold prices jumped last week to touch $1970 and rose again Tuesday back to $1925 per ounce.
With private investors across Western Europe and North America using the price spike to liquidate gold fastest since mid-2019, Chinese savers are also selling bullion reports the Global Times, quoting comment from retail dealers in Guangzhou and Beijing.
Indian gold dealers had already cut their prices last week to offer the steepest discounts against global quotes in nearly 17 months according to Reuters, "with most Asian consumers opting for selling jewelry to cash in profits."
While UK Prime Minister Boris Johnson called Russia's latest action in Ukraine "barbaric" on a visit to Nato ally Poland today, both the US and UK governments on Tuesday rejected Ukrainian pleas to enforce a no-fly zone above the would-be European Union member nation for fear of provoking nuclear war.
"China does not approve of any approach that may exacerbate tensions," said China's permanent representative to the UN Zhang Jun at Monday's emergency special session of the UN General Assembly.
"I hope what is happening in Ukraine will end up to the benefit of nations and the region," said Iran's President Ebrahim Raisi in a phonecall with Russia's President Putin last week.
"We are in favour of stopping the war," said Iran's supreme leader Ayatollah Ali Khamenei in a televised speech Tuesday, blaming the "root cause" of the crisis on Nato and the "mafia regime" of the USA.
Russia is currently brokering negotiations between Tehran and Washington in Vienna over reviving the 2015 atomic accord
"MENA faces a crisis as the world's key wheat producers are at war," says a headline meantime at Al Jazeera, noting how many countries in the Middle East and North Africa rely on grain imports from Russia and Ukraine, which between them account for well over 1/4 of global wheat exports.