END_OF_DOCUMENT_TOKEN_TO_BE_REPLACED

GOLD PRICES edged higher Monday but cut an earlier rally from 8-month lows as global bond markets stabilised from last week's rout and central bankers across the world reassured investors that they will continue their low rate and QE money creation policies, writes Atsuko Whitehouse at BullionVault.
With the Reserve Bank of Australia again buying Canberra's debt in the open market to support prices and stem the rise in yields, new US President Joe Biden moved to the next stage of getting his $1.9 trillion coronavirus relief package approved by the Senate before some unemployment support measures run out in two weeks' time.
Spot gold prices halved an initial $40 rally by Monday lunchtime in London, trading at $1735 per ounce after falling 2.8% last week to the lowest in US Dollar terms since June and losing 6.2% in February, the worst monthly decline since December 2016 in percentage terms.
"Gold's recovery in Asian hours this morning reflects some bargain hunting on oversold conditions," says the latest daily gold-price and precious metals note from Rhona O'Connell at brokerage Stone X Group Inc.
Gold prices in China – the metal's No.1 consumer market – fell overnight to their lowest since last April in Yuan terms, but the premium in Shanghai compared to London quotes increased to more than $10 per ounce, the biggest in 17 months. 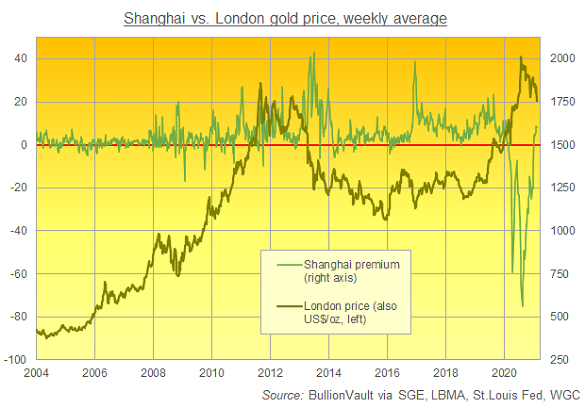 China's historic 2020 gold discount to London prices – signalling weak demand versus supply amid the global Covid Crisis – has flipped back into a premium since January, rising ahead of last month's key buying festival of the Chinese New Year.
Last year's discount reached as deep as $88 per ounce last August, when both Yuan and Dollar prices hit all-time highs on the collapse of bond yields amid the Covid-19 pandemic.
"Chinese banks have been making enquiries about kilo bar imports more and more over the last week," says Chinese bank ICBC Standard Bank's former Tokyo manager Bruce Ikemizu, now chief director of the Japan Bullion Market Association.
"This is probably due to new import quota granted by the People's Bank of China."
Monday's rally in gold prices, says O'Connell at StoneX, also reflects "continued conciliatory noises coming from major central bankers, which has taken some of the heat out of the bond market sell-off."
The 10-year US Treasury yield started the week lower, falling to 1.429% having leapt to a fresh 12-month high of 1.614% last week.
Bond yields rise as prices fall.
The Dollar Index – a measure of the US currency's value versus its major peers – found some resistance to extend the move higher, following Friday's strong advance of 0.8%.
Gold prices for UK investors in Pounds per ounce hovered almost sideways at £1247 after paring a 1% jump Monday morning as Sterling recovered against the US Dollar despite 6 cases of the Brazilian coronavirus variant being detected in the UK, including from one unidentified individual.
While more than 20 million Britons have received their first coronavirus vaccine dose, Public Health England warns that the mutation may be more resistant to existing inoculations.
European gold prices rose 0.4% to €1441 per ounce, while European stocks bounced from Friday's sharp losses to a near 1-month low during the last session.
The rally in shares came as Eurozone manufacturing activity data came in ahead of analyst forecasts for February but China's PMI was weaker.
Oil prices rose on Monday as both Brent Crude and US West Texas Intermediate rose 1% after they finished 18% higher in February.
Prices for silver – primarily an industrial metal – edged higher by 0.8% to $26.88 after dropping 2.2% last week and 1.2% for the month.
Platinum, which finds two-thirds of its demand from industrial uses, led by auto-catalysts, rose 2.0% to $1216 per ounce, recovering 6.6% drop recorded last week.
The white metal still ended 11% up for February.