END_OF_DOCUMENT_TOKEN_TO_BE_REPLACED

GOLD PRICES sank 2% on Monday from last week's close, dipping near $1200 per ounce as crude oil stabilized, world stock markets rose, and the US Dollar surged on the currency markets thanks to a plunge in the British Pound ahead of the UK's Brexit vote on EU membership, now scheduled for 3 months' time.
"Uncertainty over the result of the 'Brexit' referendum on June 23rd could see further losses in Sterling," notes Jonathan Butler in London for Japanese conglomerate Mitsubishi, "which could help strengthen the Dollar and keep USD-denominated precious metal prices on the defensive."
Gold priced in British Pounds today slipped but then rallied back to £860 per ounce, its closing level from Friday and the fastest 7-week gain at 20% so far in 2016 since the peak of the financial crisis amid English rioting in August 2011.
"Today sees stocks sharply higher," says David Govett at London brokers Marex Spectron, "[with] oil above $30, the Dollar up and guess what? Gold is down $22.
"I reiterate, gold is following other markets...Attempting to predict where gold will go on its own merits is pointless, despite some people's slavish devotion to technicals and fundamentals."
Gold prices rallied as New York trading began Monday, recovering to $1210 per ounce but holding $16 lower from Asian trade.
Friday's technical analysis of gold price charts from Canadian bullion bank Scotia Mocatta called last week's "slightly lower close at $1231...further support to our view that gold indeed broke out the falling wedge formation that had kept the metal in a downward trend since mid-2013.
"Should gold surpass our near-term target of $1305," says Scotia – pointing to the January 2015 high in Dollar terms – we expect the metal to close in on its 200-week moving average, currently at $1344."
Looking at external factors, "Expectations surrounding interest rate hikes in the US and interest rate reductions in Japan and Europe have on net been positive for gold," says French investment and bullion bank Societe Generale's analyst Robin Bhar.
"Recent fund managers’ surveys show investors want capital preservation, as evidenced by the preference for cash, bonds, gold and defensive stock sectors such as telecoms."
Japan's policy of negative interest rates on central bank deposits has " sparked a public outcry," reports the Wall Street Journal, as "lawmakers say it victimizes consumers and sends a message of despair."
Friday saw yet another net inflow of gold bullion needed to back shares in giant ETF the SPDR Gold Trust (NYSEArca:GLD), taking the fund's holdings to a 9-month high of 713 tonnes.
Latest data released by US regulator the CFTC meantime showed bullish betting on Comex gold futures and options rising once more in the week-ending last Tuesday, but conviction remaining far below historic averages. 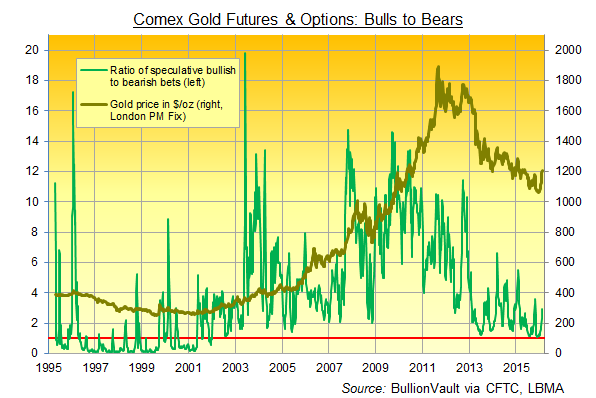 Measuring the number of bullish against bearish bets held by all non-industry players, the ratio last week rose to its highest level since October at 2.9.
The 20-year average, in contrast, sits above 20 bullish contracts for every 1 bearish bet.
Silver betting, on the CFTC data, has become much more heated, with the 'Managed Money' category of traders holding a larger number of bullish contracts only 10 times in the last decade, 5 of those since the 2013 price crash.
Silver prices today fell through the $15 level for the first time in almost 2 weeks, sinking 1.7% at the start of London trade before recovering to $15.15 per ounce – some 9% higher for 2016 to date.
But that still left the Gold/Silver Ratio of the two precious metals' relative prices at a 7-year high above 80 ounces of silver per 1 ounce of gold.