END_OF_DOCUMENT_TOKEN_TO_BE_REPLACED

GOLD PRICES surged within $3 per ounce of $1900 in London trade Thursday, hitting fresh 8-month highs in Dollar terms as global stock markets slipped, as did energy prices, after fighting broke out in Ukraine's 'breakaway' region of Donbas.
With Russian-backed separatists exchanging mortar fire with Ukrainian troops, gold priced in the Euro very nearly touched €1700 per ounce for the first time since August 2020 – the month of gold's current all-time highs.
Gold in Japanese Yen rose higher still, breaching ¥7000 per gram and coming within ¥40 of its record high. 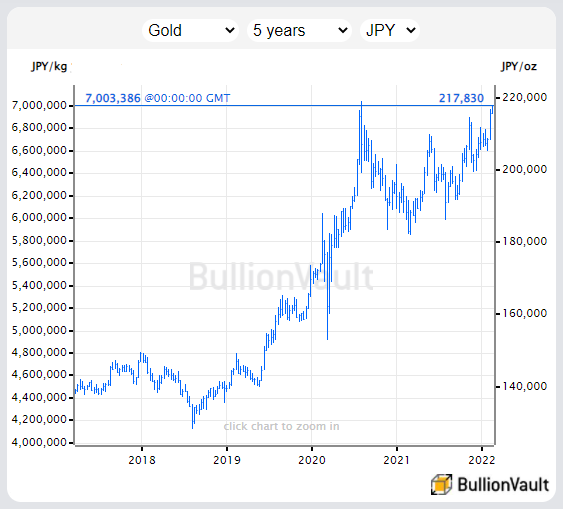 "An attack [on Ukraine by Russian forces] could come at any time," said a US State Department spokesman late Wednesday, "preceded by a fabricated pretext [of] fake videos, false accusations."
The US and Nato meantime repeated that they've seen no sign of Russian troops pulling back from Ukraine's borders as claimed by Moscow since Tuesday.
But Russia's forces "can't just take to the air and all fly away," said a Kremlin spokesman today.
"This is a process that will take some time."
"Classic risk-off moves late in the Asian session," says one spread-betting bookmaker's analyst, "with equity index futures lower, gold and the Yen higher.
"Should Russia invade, then gold is likely to be catapulted higher."
But "[it's] best not to make investment decisions around this," counters Canadian economist David Rosenberg, because "if Putin really wanted to invade, he would have done it already.
"He knows better than to blow up the Russian economy. Diplomacy will win out and he's going to end up getting what he wants."
Among precious metals, any conflict or further financial sanctions against Russia could see palladium "most affected" says a note from Asia-focused bank and London bullion market maker Standard Chartered, because the country accounts for 35% of primary mining output in what StanChart already expects to be an "undersupplied market this year".
Palladium prices rose again Thursday, reaching what was a 4-month high when regained in late-January at $2336 per ounce.
"The Russia/Ukraine conflict is also affecting platinum, although not as much as palladium," says a note from Belgian recycling, refining and precious-metal technology specialists Umicore, calling the white metal's "breakout above $1030...technically encouraging" on the platinum price chart.
The US Department of Energy – after last year starting to fund research to ensure domestic US supplies of "critical materials" including platinum-group metals – this week invited feedback on a $9.5 billion program to "ramp up" the use of clean-hydrogen fuel cell technology, which uses platinum as a catalyst.
Wednesday saw trading volumes in Nymex platinum futures and options contracts rise by almost 1/4 from Tuesday's level, while trading in gold, silver and palladium derivatives ease back.
The number of shares outstanding in giant gold-backed ETF the SPDR Gold Trust (NYSEArca: GLD) meantime held unchanged for the 3rd session this week, needing 1,019 tonnes of bullion – the most since mid-August – at last night's close.
iShares' Silver Trust (NYSEArca: SLV) was also unchanged in size, needing 17,039 tonnes of bullion backing – the most since 1 December.
Silver prices rose Thursday within 15 cents of Monday's 3-week Dollar high, touching $23.85 per ounce.
The UK gold price in Pounds per ounce meantime rose to its highest since November, gaining 3.2% for the week so far at £1392.