END_OF_DOCUMENT_TOKEN_TO_BE_REPLACED

GOLD PRICES slipped further on Thursday, extending yesterday's 2.1% plunge from new 9-week highs even as US interest rates lagged inflation forecasts by a wider margin – usually a driver of higher gold prices – and US President Donald Trump was condemned worldwide for inciting angry supporters to storm the Capitol in a violent and failed attempt to stop Democrat Joe Biden taking over at the White House in 2 weeks' time.
With Spain's stock markets falling while the rest of Europe's bourses rose again, gold priced in the Euro traded more than €30 per ounce below yesterday's 7-week peak at €1591.
UK shares and gold prices also fell even as the Pound retreated on the FX market, dropping 2.0% from Wednesday's top of £1438 per ounce.
"For several hours, our collective strength had politicians in Washington in absolute terror," Newsweek reports a post on Telegram from Trump's so-called Proud Boys supporters.
"The treacherous pawns [ie, cops] were also terrified."
The drop in gold and silver prices – down 2.7% from Wednesday morning's 4-month highs near $28 per ounce – "looks very much like 'buy the rumour, sell the fact' – at least for now," says analyst Rhona O'Connell at equity and commodities brokerage StoneX, noting that the 117th Congress will be the first all-Democrat "blue sweep" since the first two years of President Obama's first term in 2009-2011.
Gold priced in Dollars rose 55.4% during that time.
With the Georgia run-off for Senate seats going the way of the Democrats on Wednesday while Joe Biden was confirmed as the next President by Congress this morning, the US election result "opens the door to a stronger [fiscal] stimulus programme," says O'Connell. 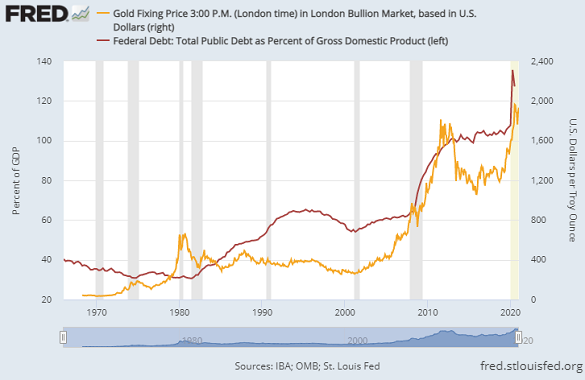 Following a personal appearance by Trump yesterday afternoon, what one channel of Fox News called a "pro-Trump mob" smashed property, chanted "Stop the steal!" and clashed with police who fired tear gas and shot one protester dead as 3 other died of "medical emergencies".
While bond yields continued to rise meantime Thursday, market-implied inflation rates rose faster, holding real interest rates on 10-year US debt 3 basis points lower at minus 1.05%.
Calling the uptick in nominal bond yields "an awakening moment" for investors, "People will start liquidating gold looking for other opportunities out there," reckons one Comex futures broker quoted by Bloomberg.
But giant gold ETF trust fund the SPDR product (NYSEArca: GLD) however saw no net change in size on Wednesday, while smaller competitor the iShares Gold Trust (NYSEArca: IAU) expanded by 0.1%, suggesting that yesterday's price spike and retreat were led instead by trading in derivatives contracts.
In the physical market, gold demand net of client selling meantime turned positive BullionVault after marking 2 sessions of net liquidation, while trading volumes held 28.0% above last year's average at $6.1 million.
So-called cryptocurrency Bitcoin meantime rose above $38,000 in price early Thursday, doubling from this time 4 weeks ago.
Analysts at giant US investment bank (and leading London bullion market-maker) J.P.Morgan said this week Bitcoin "could" rise to $146,000 if its total market capitalization grows to match the current value of all investment gold.
US banks can interact with so-called "stable coins" backed by the Dollar or other recognized assets, financial regulator the OCC said Monday.
Here in the UK however, Thursday saw a ban on private "retail" investors trading derivatives on cryptocurrencies come into force following action by City watchdog the FCA.
Accused by one "blockchain investor" as choosing "to abdicate rather than lead", the FCA says crypto-derivatives "cannot be reliably valued by retail consumers" with the sector also prey to "market abuse and financial crime".
The aggregate market value of all so-called crypto-currencies has now risen 5-fold in the last 12 months to more than $1 trillion according to CoinGecko – around a tenth of all the gold ever mined in history.
Still the largest at over 70% of crypto's notional value, Bitcoin was created in 2009 by an anonymous programmer.
Of the 2,218 "coins" now showing a market-cap on CoinGecko's list, the smallest – UpToken – has over 78 million units in circulation, worth in total just 0.0059 US cents.
Back in gold, November's price drop – the steepest gold drop in 4 years – coincided with a return to the net selling among central banks as a group seen in August and September according to data collated and published Thursday by the mining industry's World Gold Council.
Before August's new all-time record highs in the gold price above $2000 per ounce, net selling by the official sector was seen in only 8 months across the prior 5 years.