END_OF_DOCUMENT_TOKEN_TO_BE_REPLACED

GOLD PRICES recovered a $10 drop Wednesday lunchtime in London to trade above $1740 per ounce against a weakening Dollar as new US data ahead of today's release of meeting minutes from the Federal Reserve's November interest-rate decision showed a rise in jobless benefit claims but also rising orders for durable goods.
Gold priced in the Euro also dropped to 2-week lows, trading around €1680, and the Sterling gold price hit 3-week lows beneath £1450 per ounce.
Global stock markets meantime rose with bond prices, but crude oil sank as the G7 group of rich-world nations debated a price cap on Russian supplies, hoping to hurt the energy producer over its continued war in Ukraine.
With gold bullion currently on course for its highest monthly US Dollar finish since July, the price of crude oil on Wednesday fell near its cheapest since January – down $2 per barrel of US WTI and only $3 above Monday's new 10-month low – after a European official said the G7 may agree to pay no more than $65-70 per barrel of seaborne Urals crude, currently trading around $68 in the Mediterranean according to Reuters.
"The news added to demand concerns relating to top crude oil importer China," the newswire goes on, "which has been grappling with a surge in Covid-19 cases, with Shanghai tightening rules late on Tuesday." 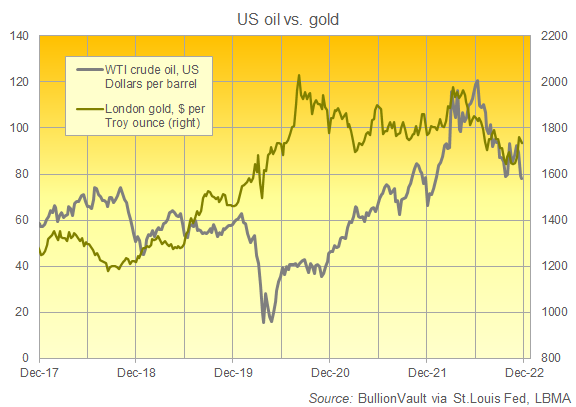 Natural gas prices in contrast jumped Wednesday, gaining over 6% on European contracts and nearly 11% on US futures, after the European Commission set a market-wide price cap which only takes effect if it's breached for 2 weeks running – something which would not have been triggered even at the peak of this year's historic price surge.
Longer-dated US bond yields meanwhile fell steeply as oil prices retreated ahead of today's US Fed minutes, taking Washington's 30-year borrowing rate beneath 3.80% per annum, the lowest in 7 weeks and half-a-percentage point lower from the release of October's below-forecast US inflation data.
While a half-point rise at the Fed's December meeting remains the consensus forecast, betting on a 3/4-point hike today reached almost 29% of positions in Fed Funds futures, according to derivatives exchange the CME – the highest in 2 weeks and up from zero at the start of October, but well below the 77% certainty reached in the middle of last month.
"We're going to have more work to do, because we need to see inflation really on a sustainable downward path back to 2%," said Cleveland Fed President Loretta Mester to CNBC overnight.
"We've had some good news on the inflation front, but we need to see more good news and sustained good news to make sure that we are returning to price stability as soon as we can."
The giant GLD gold ETF expanded slightly for a 2nd session running on Tuesday, growing 0.2% from last Tuesday's fresh 32-month low.