END_OF_DOCUMENT_TOKEN_TO_BE_REPLACED

GOLD PRICES rose within $2 of Monday's 7-week high in London trade Wednesday, touching $1788 even as the US Dollar rallied on the currency markets and crude oil prices fell together with longer-term interest rates amid news of worsening Covid cases and restrictions worldwide.
Vaccine-maker Pfizer says it has identified fake Covid-19 shots in Mexico and Poland.
India reported a quarter-million new daily cases of Covid-19 with over 2,000 deaths, as Western state Goa followed the new lockdown in Delhi by imposing a 10pm curfew but allowing restaurants and bars to otherwise remain open.
Crude oil fell steeply, down 2.5% for the day – and now $5 per barrel below March's 29-month high of $66 for US benchmark WTI – while marking the first anniversary of plunging below zero amid the demand destruction caused by the Covid Crisis and the supply glut caused by the Russia-Saudi price war. 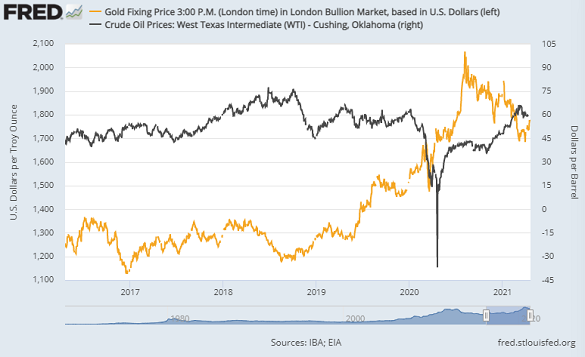 "Global growth has been stronger than expected so far and vaccination campaigns are underway," the World Bank said in a new report Wednesday, "and these trends have buoyed commodity prices.
"However, the durability of the recovery is highly uncertain...[and] emerging market and developing economies, both commodity exporters and importers, should strengthen their short-term resilience and prepare for the possibility of growth losing momentum."
Asian stock markets fell overnight, following New York lower on what pundits called "profit-taking" on stronger-than-expected quarterly earnings reports, with equities "due for some sort of drawdown."
European equities rallied however, while silver prices rose with gold – edging back above $26 per ounce – to outpace a rally in base metals which took copper back up towards February's 10-year highs.
"This week we have seen some Dollar weakness," said Dutch bank ABN Amro's precious metals analyst Georgette Boele to Reuters earlier, "but that has come to a halt.
"[We] don't see much reason to buy gold at these levels [because] if we get an uptick in the Dollar and rally in yields, gold will move lower again."
The US Dollar today rallied from a 7-week low on the FX market and Japan's 10-year government bond yield edged up to 0.07% per annum.
But Tokyo's borrowing costs remained less than half the level at February's 5-year high, while Germany's 10-year Bund yield retreated to minus 0.26% per annum, down 5 basis points from yesterday's approach of late-February's 11-month high.
The UK's 10-year borrowing costs fell again, extending the drop from mid-March's 12-month high near 0.91% to more than 16 basis points.
Washington's benchmark 10-year yield meantime fell back today to 1.56%, a 5-week low when reached last Thursday and almost one-fifth of a point below mid-March's 14-month high.
Over in 'digital assets', original crypto-currency Bitcoin struggled Wednesday around 3-week lows, down by more than 15% from mid-April's fresh record.
Comedy crypto Dogecoin meantime lost over 24% from yesterday's #DogeDay highs, losing almost one-third from last week's sudden spike but still over 5 times higher for April so far.
"J.P.Morgan warns of Bitcoin weakness as futures get liquidated," says a headline at Bloomberg.
Despite US regulatory action over money-laundering and fraud in the crypto sector, "Top [UK] investor Baillie Gifford joins Bitcoin rush with $100m funding for Britain's Blockchain.com," says The Telegraph, an apparent "seal of approval" for crypto according to London freesheet CityAM.
UK finance minister Rishi Sunak this week told the Bank of England to start working on launching a central-bank digital currency, a project he then dubbed "Britcoin".
The move is just "reactionary panic to China's hugely [over-] hyped digital currency advances," according to the Financial Times.
"The UK government is also consulting over proposals to relax stock market listing rules," reports Reuters, "due to a concern that Britain is less attractive than the United States as a listing venue, especially for tech companies whose founders want to keep an sizeable role."