END_OF_DOCUMENT_TOKEN_TO_BE_REPLACED

GOLD PRICES jumped to a 3-week high against a fast-falling US Dollar on Friday, trading above $1673 per ounce as more US yield curves inverted, pointing to a recession ahead, and new US jobs data gave a very mixed picture following this week's Federal Reserve hike to interest rates.
Silver prices meantime leapt to 4-week highs above $20.50 per ounce, up 9.1% from the low hit after Wednesday's Fed decision.
Global stock markets also rallied, snapping a 4-day losing streak with a jump of 2.1% on European bourses and a strong opening on Wall Street after Hong Kong closed with a 5.4% gain as rumors spread that Beijing is reconsidering its 'zero Covid' policy of lockdowns across China, the world's 2nd largest economy.
The Bureau of Labor Statistics then said today that the USA added 261,000 jobs to non-farm payrolls last month, slower by almost 1/5th from September's additions but 30% above analyst forecasts.
Wage growth in the world's largest economy also slowed however – down to the weakest pace in 14 months at 4.7% and lagging the latest CPI inflation estimate by 3.5 percentage points of real-terms wage cuts – while the US unemployment rate rose from a half-century low of 3.5% to 3.7%, defying analyst predictions for no change.
"The bottom line here is that the labor market is softening but has not yet reached the point where the data are screaming at the Fed to stop tightening," reckons one economist.
With the gap between 10-year and 2-year yields now the most inverted since 1981 as longer-term rates trade below shorter-term yields, this last week has also seen the 10-year to 3-month Treasury yield curve invert, cementing the view among some economists that a US recession is now guaranteed. 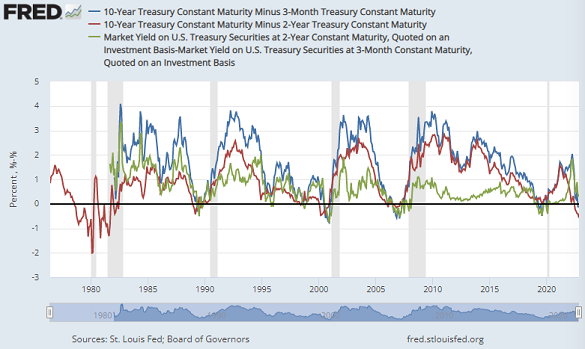 Three-month Treasury rates have risen by well over 4 percentage points since the start of 2022 – the steepest such rise since the Fed under Paul Volcker flipped in 1980 from 17% overnight rates to below 10% and then back up near 20% to try tackling inflation of 14% – but eased Friday from yesterday's new 15-year highs, edging back 10 basis points to 4.12% per annum.
The yield on 2-year Treasuries meantime held at 4.71%, while 10-year rates ticked up to 4.15%, pulling the 10-3 curve back into positive territory.
"Rising yield and Dollar are likely to remain headwinds for the gold price until the Fed turns dovish," says Australasian banking group ANZ in a note.
Gold prices however leapt following today's jobs data, taking the precious metal back above what some technical analysts saw as a key Fibonacci level as well as some short-term moving averages to regain the $1670 "inflection point" where the precious metal spiked and then fell hard on the release of Wednesday's policy hike and comments from the US Fed.
Gold meantime jumped to a 3-week high in British Pounds at £1479 and a 2-week price high for Euro investors at €1690 per ounce, 2.6% above Monday's approach of 9-month lows.
Friday's US jobs data left betting on next month's Fed rate-rise decision evenly split between a fifth hike of 75 basis points or a 50bps rise
But despite the yield curve signalling recession, betting has leapt that Fed rates will end next year at 5.00% or above, putting the odds at better than 3-in-4 – flipping the position of this time last week, up from 1-in-2 yesterday, and up from near-zero this time last month.
Services-sector survey data from China, the UK and then the USA showed activity shrinking in October from the month before.
With global supply chains and China's GDP hit by the country's continuing 'zero Covid' policy, parts of Beijing remained in lockdown Friday, as did workers at the world's largest Apple iPhone factory – the Foxconn plant in Zhengzhou – while social media users expressed outrage at the death of a 3-year old boy apparently barred from medical help after a suspected gas leak at his family's locked-down apartment block.
"The situation is changing now and China's 'dynamic zero' will also undergo major changes," said a former senior disease control expert in China, pointing to new anti-viral drugs and vaccines.
Thursday saw the giant GLD gold-backed ETF resume its liquidation after pausing on Wednesday, with investor outflows shrinking the trust's shares in issue by 1.2% for the week so far.
Heading for its 4th consecutive weekly outflow, the GLD is now the smallest since mid-March 2020, start of the first-wave Covid Crisis hitting Europe and North America.