END_OF_DOCUMENT_TOKEN_TO_BE_REPLACED

The US DOLLAR leapt and US gold sank alongside bond, stockmarket, crude oil and crypto prices on Tuesday as new data said inflation in the cost of living in the world's largest economy is accelerating outside of energy prices, raising expectations for a 3rd consecutive steep interest-rate hike from the Federal Reserve.
While the headline US Consumer Price Index rose only 0.1% in August from July, the 'core' measure – excluding fuel and food costs – rose by 0.6%, twice the pace of both analyst forecasts and the prior month's rise.
Gasoline prices sank 10.6% last month, the Bureau of Labor Statistics said, but the cost of shelter rose 0.7% and medical care 0.8%.
Together, that took annual pace of core CPI rises up to 6.3%, just shy of February and March's 4-decade inflation highs.
Betting on the Fed raising its key interest rate by only half-a-percentage at next week's meeting evaporated on the news, with 9-in-10 bets now backing a 0.75 hike and the rest suddenly backing a full 1 percent move to a ceiling of 4.50%.
That would mark the Fed's sharpest 1-meeting hike since March 1984.
"Inflation remained subdued, impressively so by the standards of the 1970s," says a New York Fed review of that year.
"[But] price increases were still larger than consistent with long-run stability." 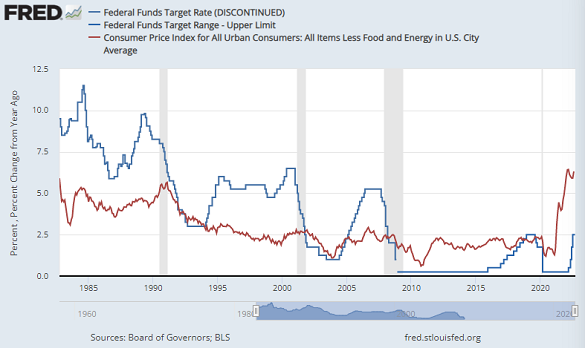 Gold priced in the Dollar sank $30 per ounce on today's US inflation data, down 2.1% from Monday morning's 2-week high of $1735 and dipping below $1700 for the first time since Thursday saw the US currency drop hard on the foreign exchange market following the European Central Bank's 2nd consecutive 0.75 rise to its key interest rate.
With the ECB now paying 0.75% per annum on commercial bank deposits, inflation in Germany – the 19-nation currency union's largest economy – held at a 4-decade high of 8.8% per year last month, new data confirmed Tuesday.
Spain's inflation rate meantime accelerated to 10.5%, beating analyst forecasts.
Having peaked lower this morning, Euro gold prices fell far less than Dollar quotes on today's US inflation news, dropping back below €1700 per ounce but holding above yesterday's 7-week low of €1691.
The UK gold price in Pounds per ounce meantime slipped towards 2-week lows at £1471 as yesterday's weak UK GDP data was followed by news of the lowest UK unemployment rate in 5 decades plus a rise to 5.5% in average annual earnings growth.
That still lags consumer-price inflation of 10.1% however, the worst cost-of-living increase since the early 1980s.
With government bond prices falling hard Tuesday, the UK's borrowing costs rose to new 11-year highs, reaching 3.17% per annum on 10-year Gilts, while Germany's comparable Bund rate jumped towards June's 8-year peak of 1.76%.
US Treasury yields also jumped by 9 basis points on 10-year debt, rising close to mid-June's 11-year peak of 3.49% per annum on 10-year debt.
So-called "real yields" also jumped, breaking above 1.00% per annum on 10-year Treasury inflation-protected securities for the first time since December 2018 as global equities snapped their longest run of daily gains so far in 2022, flipping a 0.2% rise in the MSCI World Index to a 0.4% drop as New York stock markets opened following the US inflation report.
Most commodities also fell with gold, equity and bond prices following the US inflation print, pulling crude oil $2 below end-August's level and taking silver prices down almost 60 cents from Monday's sudden 4-week highs near $20 per ounce.
So-called crypto currency Bitcoin meantime sank again, losing 4.8% in Dollar terms and trading more than 50% lower for 2022 to date.