END_OF_DOCUMENT_TOKEN_TO_BE_REPLACED

The GOLD PRICE spiked Wednesday by more than 1% to peak above $1800 per ounce for a 2nd day running against a plunging US Dollar after new data from the world's largest economy said US consumer prices were unchanged overall last month from June thanks to a sharp retreat in gasoline prices.
On an annual basis, headline CPI inflation dropped to 8.5% from June's 40-year high of 9.0% (itself downwardly revised by 0.1), slower than the 8.7% predicted by consensus forecasts from analysts.
So-called 'core' inflation – excluding fuel and food – held at 5.9% per year, defying analyst forecasts for a rise and half-a-percentage point below the 4-decade highs of February and March.
The news saw the Dollar sink to 5-week lows on its trade-weighted index against the rest of the world's major currencies, plunging by more than 1% on the news.
The gold price then fell back to unchanged in Dollar terms at $1795 per ounce, making for a steep drop to 2-session lows in Euros and Sterling terms at €1740 and £1470 respectively.
"Less expensive oil is helpful in taming pump prices," says spokesperson Andrew Gross of motoring association the AAA.
"Couple that with fewer drivers fueling up, and...it’s possible that the national average will fall below $4 this week."
Pump prices across the USA are already more than 14% below this time in July, according to AAA data.
US crude oil today struggled around $90 per barrel, a new 7.5-year high when reached in the weeks leading up to Russia's latest invasion of Ukraine but almost 30% below early March's spike towards the record highs of mid-2008. 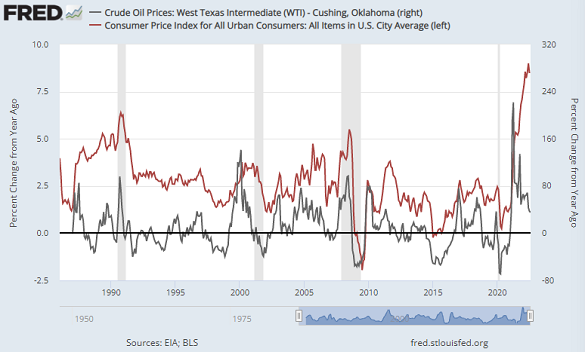 China's cost of living also missed analyst forecasts for July, new data said Wednesday, putting headline inflation at 2.7% – up from June's 2.5% per year but shy of the 2.9% expected – with producer price inflation for Chinese businesses slowing almost 2 percentage points to 4.2% rather than jumping to 8.0% as the consensus outlook had predicted.
World No.4 economy Germany in contrast confirmed that its CPI inflation rate held at 8.5% in July, just shy of May's 4-decade record on the European Union's harmonized measure.
December contracts for natural gas in Western Europe – which relies on now-sanctioned Russia for almost 2/5ths of its gas imports – today rose more than 6.5% to approach last week's fresh lifetime highs, costing more than 7 times as much as they did 12 months ago today.
The UK government is preparing contingency plans for an energy shortage in New Year 2023, news reports said Wednesday, including 4-day blackouts for industry and possibly households too.
Bond yields whipped violently around today's US inflation data, edging towards multi-week highs ahead of the Bureau of Labor Statistics' release but then falling back to push longer-term borrowing costs higher once more, back towards last night's close at 2.75% on conventional US 10-year Treasury debt and 0.31% on inflation-protected TIPS.
Western stock markets rose in contrast, reversing an earlier drop in Europe after Chinese tech stocks led a sharp drop in Asia.
"Inflation slowed in July, showing Fed's rate hikes are working," says a headline at CBS.
The Federal Reserve last month raised its overnight interest rate to a ceiling of 2.5% per annum.
Betting in the interest-rate futures market sank today on the Fed making a 3rd consecutive hike of 0.75 percentage points at its September meeting, dropping from over 60% to barely 40% of the market and pricing the odds of a smaller half-point hike at the strongest in 3 weeks.