END_OF_DOCUMENT_TOKEN_TO_BE_REPLACED

GOLD PRICES fell beneath November's low to hit the weakest in 8 months in Asian trade Friday, falling against a rising US Dollar as Asian stock markets fell over 1%.
Bullion priced for settlement in London then rallied $10 per ounce from that low of $1760 but headed for a 2.3% weekly drop as the sell-off in major government bonds continued, driving longer-term interest rates higher.
European stock markets rose and Bitcoin ticked a fresh all-time high at $52,800 but crude oil trimmed its 25% gains for 2021 to date.
"We seem to be set for a series of inflation scares," says today's Buttonwood column in The Economist, looking at this week's steep rise in US government borrowing costs and the jump in market-implied inflation forecasts to the highest since summer 2014.
"[But] break-evens will not tell you a lot about whether inflation might be sustained. They are too volatile to be a reliable guide."
Yields on inflation-protected US Treasury bonds show a strong correlation with gold, highlighting the link between bullion prices and expectations for loss of real purchasing power in the Dollar.
Ten-year TIPS yields jumped Thursday to minus 0.87% per annum, the least negative since November and almost one-fifth of 1 percentage point above last Wednesday's low of minus 1.06%, the fastest such rise since April 2020.
That has seen the 10-year US break-even rate – the gap between yields on conventional and on inflation-protected Treasury bonds – slump further from Tuesday's new 6.5 year high of 2.26%, sinking 8 basis points for the hardest 2-day drop in over 5 months. 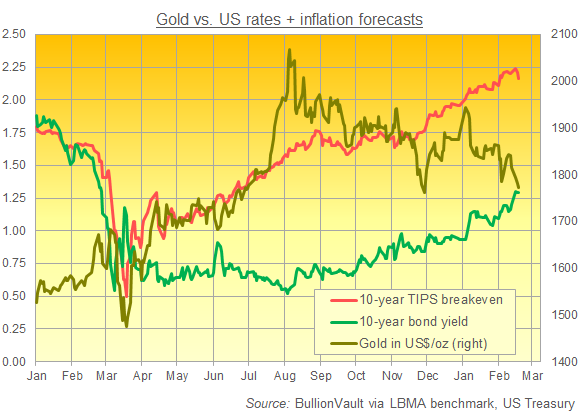 Meantime in physical flows, latest trade data from Switzerland – gold's major refining hub – say bullion exports to No.2 consumer nation India in January hit their highest since May 2019, but demand from No.1 consumer China was still at "rock bottom" ahead of last week's key Lunar New Year holidays.
Swiss gold exports "swung to net imports from China and Hong Kong in March last year," notes Rhona O'Connnell at brokerage StoneX, "reflecting the fall in jewelry and bar & coin demand as lockdown took over.
"This could [now become] a positive sign for the market when [China's gold] recovery finally sets in, as it implies a net drawdown in domestic inventories...[but] Swiss trade figures for January still posted a net import from the region, which suggests that either the domestic jewellers were not expecting much recovery in purchases ahead of the Lunar New Year, or that they were well-furnished with inventory."
Gold prices on the Shanghai Gold Exchange today dipped to their lowest since start-April last year at ¥369 per gram even as the Yuan fell towards 1-month lows against the Dollar.
That cut the premium for Shanghai gold over London prices in half from yesterday's post-New Year return, down to $4.28 per ounce after finally moving out of 2020's Covid crash discount at the start of January.
India gold prices have meantime held at a premium to London every week so far in 2021 according to data from Reuters.
Starting even before this month's unexpected cut to gold and silver import duty in the Modi Government's Union Budget, that Indian gold premium of $5 per ounce contrasts with the repeated discounts seen since New Delhi began trying to cut household gold demand with extra duty, tax, reporting rules and complex import barriers in 2013.