END_OF_DOCUMENT_TOKEN_TO_BE_REPLACED

GOLD PRICES touched $1845 per ounce in London trade Tuesday, rallying $35 from Monday morning's 7-week lows as the Dollar retreated on the currency market and global stock markets edged higher with longer-term interest rates in the bond market.
World No.2 economy China meantime said it's building a 4,000-capacity quarantine center as cases of Covid-19 rise, while hospitals in No.3 Japan were said to be "close to collapse" amid a surge in cases after New Year, and the government in No.4 Germany discussed extending its current strict lockdown until mid-February.
Norway's warning on the safety of vaccinating very frail patients against Covid-19 made each of the top 3 best read stories on Bloomberg.com
"2021 shall be another year of growth for precious metals," reckons a new forecast from Frederic Panizzutti, managing director at the Dubai office of Swiss refining and finance group MKS Pamp.
"Global economic instability, low yields, the risk for higher inflation and more downside pressure on the US Dollar remain some of the major factors supporting the well-established bull trend" in gold prices.
Yesterday's strong GDP data from China – source of Covid-19 yet the only major economy to avoid shrinking amid the 2020 pandemic – was followed today by better-than-expected economic sentiment surveys from Germany and the wider 19-nation Eurozone.
But rather than showing inflation, consumer prices in Germany – the largest Euro economy and the world's third largest gold consumer nation in 2020 – fell 0.3% across 2020 new figures also said Tuesday, pulled sharply lower by a plunge in the cost of clothes and shoes.
Since 1st January, shop and services prices have risen as the temporary Covid Crisis cut of 2 percentage points to MwSt sales tax expired.
Adjusted for inflation expectations, real interest rates at the European Central Bank and also on 10-year German Bunds ended 2020 at minus 0.72%, the least negative since 2014 and early 2019 respectively according to data from consultancy Yardeni Research. 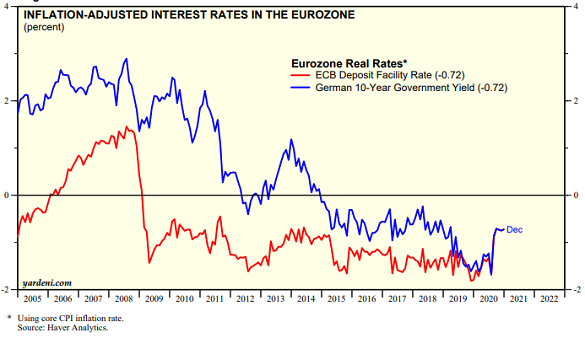 Today's dip in the Dollar left the gold price in Euros little changed from last weekend's finish at €1517 while the gold price in UK Pounds per ounce rallied to £1353, up 0.6% from what was also its lowest Friday finish since end-November.
" Inflation is dead," says the headline over an article at Germany's Welt newspaper by Thomas Straubhaar, Professor of Economics at the University of Hamburg.
"Budget deficits are literally exploding...causing public debt to rise far beyond any historical limit. [But] investors are prepared to subscribe to German 10-year Bunds at slightly negative nominal interest rates. That speaks more in favor of deflation than inflation expectations in the financial markets.
"Overcapacity and stockpiles were built up in the Corona crisis. High wage demands are unlikely to have any chance of success...[and even if prices do rise] central banks have leeway for raising interest rates to contain inflation expectations at an early stage."
"Right now, with interest rates at historic lows, the smartest thing we can do is act big," the likely new US Treasury Secretary Janet Yellen will tell Congress today ahead of Wednesday's now high-security inauguration of President-elect Joe Biden.
"I believe the benefits will far outweigh the costs, especially if we care about helping people who have been struggling for a very long time," say the prepared notes from Yellen – chair of the Federal Reserve from 2014 to 2018 – echoing last week's comments on inequality from current Fed chief Jerome Powell.
Silver also followed gold prices higher against the weaker US Dollar on Wednesday, adding 1.6% to $25.20 but steeply below early January's 4-month peak near $28 per ounce.
Fellow industrial precious-metal platinum briefly popped above $1100 per ounce meantime, its highest since September 2016 when reached this New Year.