END_OF_DOCUMENT_TOKEN_TO_BE_REPLACED

GOLD PRICES fell back to erase the last of this week's earlier $40 gain on Friday, trading back at $1815 per ounce after 5 days of new record highs in world stock markets coincided with 5 days of investor outflows from the giant gold-backed GLD ETF trust fund.
New York equities struggled however at Friday's opening as US consumer sentiment came in at a 6-month low on the University of Michigan's index amid the ongoing Covid Crisis, the impeachment of former president Donald Trump, and political debate over new President Joe Biden's $1.9 trillion stimulus plan.
Crude oil prices rose but copper retreated from this week's new multi-year highs, while platinum cut this week's stellar jump to $100 per ounce at $1229 – some $45 below yesterday's fresh 6-year high – and the US Dollar edged higher for a second day on the FX market.
"The 'death cross' didn’t happen [in gold] this week as the price rose further," says a note from the precious metals team at French bank and London bullion market makers BNP Paribas.
"But that seems like a temporary relief. Any renewed weakness below $1805 will end up with the chart signal being triggered" – a technical analysis pattern where the 50-day average of the metal's price falls through its 200-day average, suggesting that short-term weakness is set to pull down the longer-term direction.
"Death cross signals potential for lower pricing in gold," said a headline last November, followed by at least 4 further calls - from "poised" to "imminent" - since then.
"Gold just entered into a death cross," said CNBC in mid-July 2018.
Bullion prices then bottomed 5% lower 3 weeks later, hitting an 18-month low of $1160 before rising by four-fifths to August 2020's current record high at $2075.
Meantime today, BNP continues, "$1850-1840 has become a resistance level [as] investors sold it on a strengthening US Dollar price and opportunistic take-profit.
"Just look at gold ETFs dishoarding of the past 5 days." 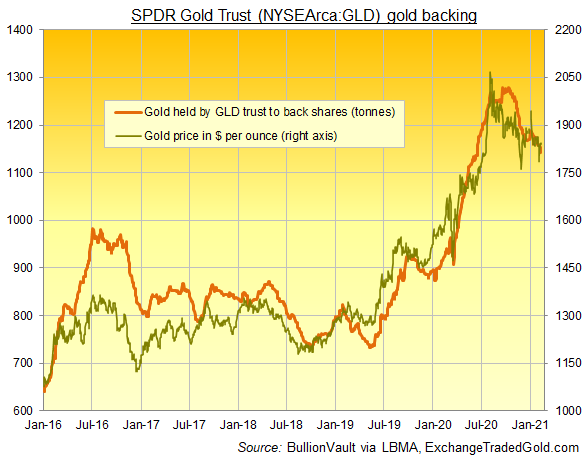 Giant gold-backed exchange-traded fund the SPDR Gold Trust (NYSEArca: GLD) saw another 0.4% of net liquidation by shareholders on Thursday, shrinking for the 5th session running to reach its smallest size since June last year with a 5th week of outflows.
Smaller and cheaper competitor the iShares product (NYSEArca: IAU) saw a very small net outflow, heading for its 4th consecutive week of investor selling.
Silver's largest ETF also saw fresh liquidation yesterday, shrinking the iShares Trust (NYSEArca: SLV) by 0.7% to its smallest size since 1st February – the middle of its massive 3-session expansion following the Reddit Ramp by posts on social media's WallStreetBets forum.
That surge saw the SLV grow by 19.1% as bullion spiked to $30 per ounce.
Silver prices today held around $27 per ounce, little changed for the week or year so far.
Bond-market prices now forecast US inflation of 2.22% over the coming 10 years – the highest since August 2014 – after dipping to a 1-week low of 2.20% on Thursday.
That put the real rate of devaluation for new buyers of 10-year US Treasury debt at 1.03% per annum, a series low for that real rate of interest when first reached as gold priced in the Dollar peaked above $2000 per ounce last summer.
"The [nominal] income earned from buying long-term US Treasurys far surpasses other comparable government bond markets in UK, Germany and Japan," says analysis from US finance giant Bank of America.
"Even after accounting for the cost of hedging out the risk of foreign currency fluctuations," says MarketWatch, "that’s an important matter for overseas investors who need to limit the damage wrought by currency volatility.
"Continued demand from abroad will also give comfort to the US Treasury Department as it finances annual $1 trillion deficits over the next decade."
But while "interest rates currently enjoy little traction in the FX market," says strategists at global bank and London bullion clearer HSBC, "historically currencies have tended to be more correlated with 2-year yields than 10-year yields" – and those shorter-term rates last week hit fresh all-time lows offering just 0.09% per year.