END_OF_DOCUMENT_TOKEN_TO_BE_REPLACED

GOLD PRICES in major currencies fell on Monday as the long-term UK bond yield jumped following the Bank of England's surprise announcement of extra Gilt buying, while the price of palladium – which finds 40% of annual supply in Russia – jumped as the Ukraine war worsened, writes Atsuko Whitehouse at BullionVault.
Spot gold prices in US Dollar terms fell 1% to $1677 per ounce after dropping 1% last Friday on the hotter-than-expected US jobs report for September, with the unemployment rate dropping back to its modern record low of 3.5%.
Gold priced in Euros meantime edged lower by 0.5% to €1730 as European stocks saw a 4th consecutive day of declines.
The UK gold price in Pounds per ounce meanwhile fell 0.9% to £1515 as the Pound made marginal gains in FX markets on Monday morning despite a fresh sell-off in UK government bonds.
The Bank of England today surprised analysts and traders by announcing that it will double its emergency QE purchases to as much as £10 billion per day between now and Friday – its existing deadline for trying to protecting pension funds and other leveraged players from continued market turmoil following the new Chancellor's mishandled tax-cutting budget announcement.
The UK Treasury today also sought to calm the Gilts market by bringing forward a much-awaited fiscal plan – showing how it plans to finance Kwasi Kwarteng's historic tax cutting promises – to 31st October.
But UK bond prices fell after today's new moves, driving the 30-year Gilt yield as much as 17 basis points higher to 4.56%, its highest level since the immediate aftermath of the Bank's initial intervention on 28th September following Kwarteng's "mini" budget of 5 days before. 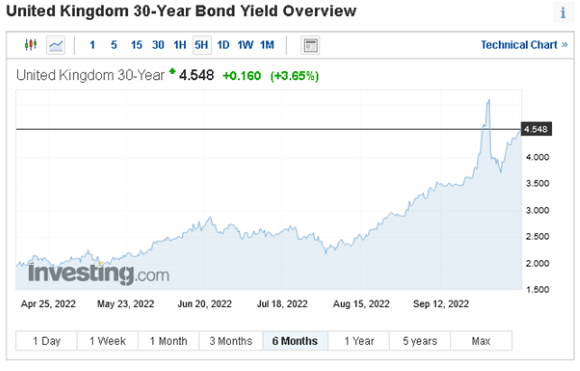 With the Bank of England so far buying only a fraction of the upper £5bn daily limit set less than 2 weeks ago, "The market doubts if the BOE will fill orders to the maximum limit, while the new measures announced signal that an extension of its temporary bond-buying is unlikely," says Pooja Kumra, rates strategist at Canadian bank Toronto-Dominion.
The BOE has bought just £4.6 billion of bonds so far, about 12% of the £40 billion capacity of the program to date.
The Bank also announced a new short-term lending facility designed to ease strains on pension funds that use liability-driven investing strategies, which are at the centre of the market turmoil.
UK stock markets fell with the FTSE100 dropping 0.3% on Monday, now down 2.6% so far since the mini budget of 23rd September.
The pan-European Stoxx 600 touched a 1-week low on Monday morning amid concerns over economic growth in the face of tightening monetary policy and the war in Ukraine.
Moscow forces hit Kyiv and other Ukrainian cities early Monday – attacks condemned by the European Union as "barbaric and cowardly" – a day after President Vladimir Putin blamed Ukraine for a "terrorist" attack on the only bridge connecting Crimea to Russia.
The price of palladium rose 3.3% to $2262 per ounce but held well below its all-time high of $3444 hit in March as the US and EU moved to embargo Russian supplies of the precious metal, primarily used in gasoline autocatalyst systems.
Platinum – which finds two-thirds of its demand from industrial uses and 12% of global mine supply from Russia – fell 0.6% to $911 per ounce, while the price of silver, which finds nearly 60% of its annual demand from industrial uses, fell 1.7% to $19.80 per ounce, a 1-week low.