END_OF_DOCUMENT_TOKEN_TO_BE_REPLACED

GOLD PRICES slipped Wednesday, trading 2.5% lower against the Dollar ahead of the Federal Reserve's long-awaited May policy decision, expected to bring the first half-point hike to overnight interest rates in 22 years.
Priced in the Dollar, gold edged back towards $1860 per ounce as Western stock markets held small losses overall ahead of the Fed.
Euro gold slipped back below €1770 and the UK Pound price held around £1490.
"Gold bugs are staring down the barrel of a hawkish Fed," says a trading note from Canadian brokerage TD Securities.
"This week's FOMC is likely to feature a 50bp hike and the start of quantitative tightening, which in turn drives liquidity risk premia [higher] for all asset prices," driving those prices lower in turn.
Betting on US interest-rate futures now sees a 97.9% chance that the Fed will hike by half-a-point today, with the other 2.1% predicting a 0.75-point hike.
The Fed hasn't made a half-point hike since May 2000 – just as the DotCom Bubble was bursting – and has in the last 4 decades only raised rates by 0.75 points once in a single move, back in November 1994.
Almost 94% of betting on June's move meantime sees the Fed Funds target rate ending next month with a ceiling of 1.75%, something which would require a three-quarters point hike either today or in 6 weeks' time.
US inflation on the core PCE measure – which excludes fuel and food prices – was last estimated at 5.2% per year. 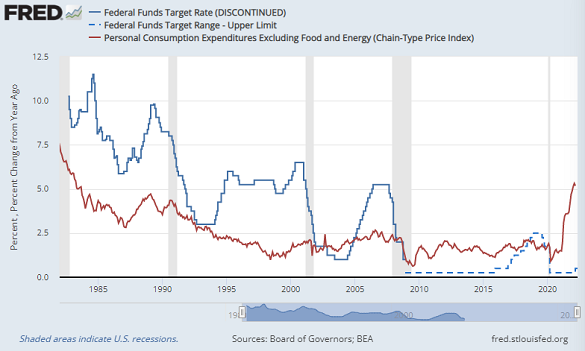 "A geopolitical risk premium is likely to keep gold prices elevated short-term," said Standard Chartered analyst Suki Cooper.
"Longer-term we expect the yield relationship to re-establish itself as the primary driver, and gold prices are likely to trend lower, albeit from elevated levels."
Usually showing a strong and negative correlation with gold prices, the so-called 'real yield' offered by 10-year TIPS debt has jumped by 0.80 percentage points over the last 3 months, the fastest such move the 2013 gold price crash.
This time however gold prices have risen by more than $55 per ounce for Dollar investors – a rise of 3.0% – and gained over 12% for both Euro and UK Pound investors.
Giant gold ETF the SPDR Gold Trust (NYSEArca: GLD) yesterday saw net liquidation for the 3rd session running, shrinking the number of shares in issue by 0.3% to the smaller in almost a month.
The smaller iShares Gold product (NYSEArca: IAU) was unchanged in size, remaining the largest since February 2021 but not seeing any net inflows of investor money for the last 2 weeks.
"US financial conditions have tightened considerably, but are still far looser than during the peak of the pandemic in March 2020 and are at similar levels seen in 2018 and 2016," says Bloomberg today of data tracking signs of stress across debt markets.
Investors have meanwhile "started backing away from the riskiest corporate bonds in the US," reports the Financial Times, with the value of 'junk' bonds trading for 70 cents on the dollar or less - "considered a sign of distress and a warning that a company may struggle to repay debts" – doubling so far in 2022 to $27 billion according to FT calculations of data from the ICE trading exchange.
Sustained periods of Fed rate rises have preceded each of the last 10 economic recessions.
India's Sensex share index meantime sank by 2.3% on Wednesday after the Reserve Bank called an unscheduled meeting and unanimously voted to raise the central bank's key interest rate by 0.4 points to 4.4% with immediate effect.
Consumer price inflation rose above 6.9% per year in March, the fastest pace since late-2020.
"The stance and policy conditions still remain accommodative," said RBI governor Shaktikanta Das, "and the rate increase merely reversed the 40 basis points repo cut delivered in May 2020."