END_OF_DOCUMENT_TOKEN_TO_BE_REPLACED

GOLD PRICES sank in Dollar terms Thursday, coming within $2 per ounce of this autumn's 2.5-year lows but rising sharply in British Pounds even as the Bank of England followed the US Federal Reserve in hiking its key interest rate by 0.75 percentage points.
"My colleagues and I are strongly committed to bringing inflation back down to our 2% goal. We have both the tools that we need and the resolve it will take," said Fed chair Jerome Powell yesterday after raising US overnight interest rates to a ceiling of 4.0% in the face of inflation running above 8.0% per year.
Also facing a 4-decade high for inflation, but now at 10.1%, "[Our] updated projections for activity and inflation describe a very challenging outlook for the UK economy," said the Bank of England today after raising its base rate to 3.0%.
The Pound sank following the Bank's move – made on a 7-2 majority of the monetary policy committee, with 1 member wanting only a half-point hike and another wanting only a quarter-point rise – hitting 2-week lows against the Dollar, which also rose sharply versus the Euro.
Together that saw the US currency gain 1.5% on its trade-weighted index against the rest of the world's major currencies, rising within 0.9% of late-September's peak as global stock markets, bond prices and commodities continued the sharp fall begun overnight on the Powell Fed's decision and comments.
"In a high inflation environment," says a note from commodities researchers at US investment bank and London bullion market maker Goldman Sachs, "gold tends to increase if the central bank is more focused on growth and falls if the central bank is focused primarily on the inflation fight.
"This means that gold...at least near term, looks more favorable in GBP and EUR, where severe terms of trade shocks make the job of fighting inflation with monetary policy much tougher." 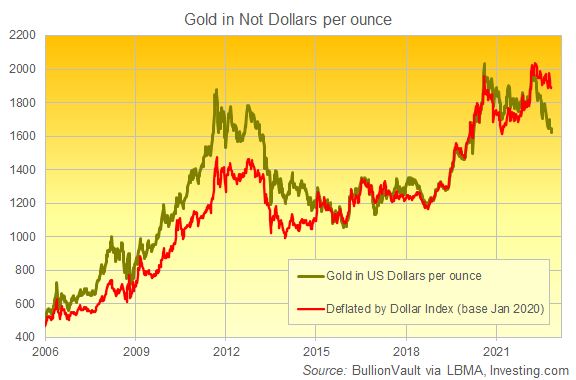 Falling below $1617 per ounce in US Dollars on Thursday, down 1.9% for the week so far, the UK gold price in Pounds per ounce in contrast rose to £1451 – up 1.9% from last Friday – while the Euro price halved its previous 1.4% weekly rise to trade at €1652.
Longer-term interest rates rose everywhere as bond prices fell Thursday, driving the US government's 10-year borrowing cost up to 4.16% per annum, the highest such bond yield since Monday's fresh 1.5-decade record at 4.25%.
So-called real rates also jumped as global equities extended the week's losses, with the implied yield on 10-year US Treasury Inflation-Protected debt rising back towards the highest since September 2009 at 1.70% per annum.
That rate was minus close to minus 1.0% this time last November, the tail-end of a 2-year stretch of negative real rates in the TIPS market spurred by the Covid Crisis.
"For gold to disconnect from the Dollar and real rates, and [so] move sustainably higher, the market has to start questioning the Fed's commitment to meeting its inflation target, as it did early this year or in the 1970s," says the note from Goldmans.
"If the US economy continues to be hit by stagflation shocks, the cost of bringing inflation back to 2% may prove too high. This is, however, not the base case of our economists."