END_OF_DOCUMENT_TOKEN_TO_BE_REPLACED

GOLD BULLION rose to new highs for the week against a falling US Dollar in London trade Thursday as world stock markets rose but energy prices fell after meeting notes from the latest US Federal Reserve rate-hike decision said the world's most important central bank is preparing to slow or cease fresh rate rises "soon".
Economic activity across all major economies is shrinking in November from October on the preliminary PMI surveys reported this week, with S&P's composite index of US manufacturing and services businesses showing its 5th consecutive decline.
US consumer sentiment has however bounced hard on the University of Michigan's survey, while orders for durable goods and sales of new homes both rebounded in October according to new data released Wednesday.
A "substantial majority" of FOMC members agreed at this month's policy meeting that "a slowing in the pace of [interest-rate] increase would likely soon be appropriate," the Fed minutes reveal.
"The labor market [has] remained extremely tight, and nominal wage growth elevated...[but] the overall tightening of global financial conditions, along with energy prices and other headwinds, [is] contributing to a slowdown in the growth rate of global real GDP."
Fed rate hikes have preceded all but 1 of the last 10 economic recessions in the US, marked here by gray vertical bars. 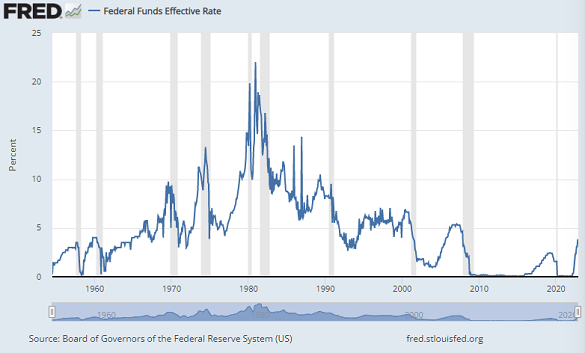 Betting on Fed Funds being hiked by another 75 basis points in December today dropped back below 1-in-5, unchanged from this time a week ago
If that were to happen in 3 weeks' time – the 5th such steep hike in a row – it would take the key US interest rate to 4.75%, a level which almost 2/3rds of betting on December 2023 now sees as the ceiling at the end of next year according to derivatives exchange the CME's FedWatch tool.
"The Fed minutes contained no hawkish surprises, and just about confirmed the pace of hikes would drop to 50 basis points in December," Reuters quotes Tai Wong, a senior trader at German refining group Heraeus' New York office.
"Smaller rate hikes by the Fed are positive for risk assets as well as for safe-haven assets like gold," adds Ravindra Rao at Indian brokerage Kotak, "because Dollar weakness supports."
With the Dollar gold price touching $1758 per ounce, the Euro price of bullion was unchanged from this time yesterday at €1686, while the UK gold price in Pounds per ounce held near 3-week lows beneath £1450.
Bond prices meantime rose with global stock markets, pushing borrowing costs lower but leaving the US yield curve – a comparison of longer-term with shorter-term rates – inverted across all tenures, with 3-month Treasuries now yielding 0.7 percentage points more than the annual yield on 10-year debt and signalling a US recession ahead on many analysts' interpretations.
US crude oil held below $78 per barrel, extending its drop after the European Union discussed a price cap on Russian supplies and trading near 2-month lows – barely changed for 2022 to date – as China extended its latest run of 'zero Covid' social and economic lockdowns.
Natural gas prices also retreated, down from this week's spike in both US and European contracts but still well over twice the cost of 12 months ago.
Ahead of today's Thanksgiving holiday, last week's drawdown of US crude oil stockpiles was 3 times greater than analysts expected on the latest Energy Information Administration data, while natural gas in storage shrank by more than analysts had expected it to grow.