END_OF_DOCUMENT_TOKEN_TO_BE_REPLACED

GOLD PRICES held onto most of yesterday's steep plunge in Asian and London trade on Wednesday, edging above $1700 per ounce as global stocks, bonds and many commodities continued to fall following stronger-than-expected US inflation data.
Brent crude oil rallied to $94 per barrel, up 6.8% from last week's 8-month low, while silver defied the weakness in gold prices to recover half of Tuesday's near-4% plunge and trade more than $2 above start-September's fresh 2-year low of $17.57 per ounce.
US borrowing costs also rose again however in the bond market, nearing mid-June's peaks at 3.50% per annum on 10-year Treasury debt.
Betting on the Fed making a full 1-point hike at next week's meeting – the first such move since 1984 – has now leapt to 1-in-3 trader positions in CME interest-rate futures contracts, having shown zero chance before yesterday's inflation news.
Making a full-point hike to 3.50% would put Fed rates sharply above Eurozone rates of 0.75% despite consumer-price inflation running at similar levels near 9% per annum.
The Euro today continued to trade at parity with the Dollar, back near 2-decade lows having sunk by 2 cents on Tuesday's US inflation print. 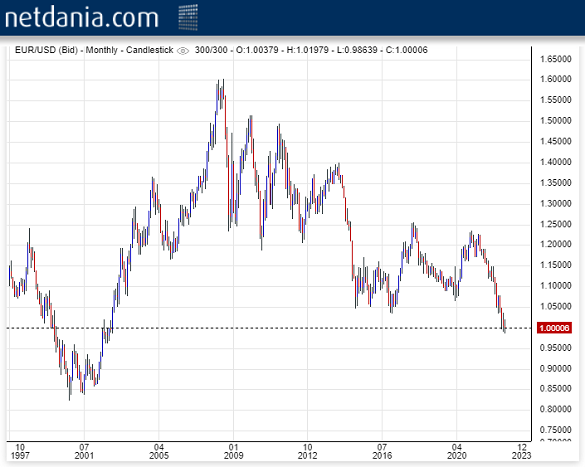 Global equities today slipped another 0.3% after sink 3.7% on the MSCI World Index Tuesday, matching the plunge of 13th June – when major government bond yields broke higher to new decade-highs – to show the steepest 1-day drop since mid-2020.
"Crude oil fell along with most risky asset classes [as] the USD rallied and bonds plunged," says Australasian bank ANZ's commodity strategist Daniel Hynes, "which weighed on investor appetite.
"It also brought back into focus the spectre of weaker economic growth as the Fed struggles to tame high consumer prices."
"We see the Dollar continuing to move higher," says US investment giant J.P.Morgan's private bank thematic strategy head David Stubbs, "even though it's now over-valued on almost every measure."
"The potential for the gold price to recover is probably limited," says German financial group Commerzbank in a note, "[because] inflation will remain high [and so] the risk of more pronounced rate hikes will not disappear for the foreseeable future."
While lower gasoline prices dented the rate of headline CPI inflation, so-called 'core' living costs rose faster in August than July, accelerating back towards the spring's 4-decade highs.
UK inflation today matched that pattern, showing a slight fall in the headline rate from July's new 4-decade record while the 'core' cost of living accelerated to the same 6.3% annual pace as US consumers suffered last month.
Sterling gold prices held tight once again around £1475 per ounce, while UK Gilt yields set fresh 11-year highs above 3.20%.
Both Italy and Germany's bond yields also rose again, nearing mid-June's peaks and holding the BTP-Bund spread – a measure of market anxiety over the Eurozone's No.1 debtor versus its No.1 economy – in the middle of the last 3 months' range at 230 basis points.
With Italy set for a right-wing coalition after this month's elections, led by 'post-fascist' party the Brothers of Italy – currently denying any financial links to Russia's Kremlin in a worsening political row – that contrasts with a mid-range level of just 125bps across the prior 18 months, worsened by the European Central Bank ending both negative overnight interest rates and new QE bond purchases in response to the worst West European inflation since the 1980s.
Euro gold prices on Wednesday held just above €1700 per ounce after slipping below that level twice so far this week – a level first broken at the precious metal's Covid Crisis peak of summer 2020 and then smashed through again as Russia invaded Crimea this February.
"We need to keep working to lower gas prices," says European Commission President Ursula von der Leyen, apparently defeated by EU member nations anxious not to upset Russia by adding a price-cap on the energy commodities it exports to the financial and personal sanctions already imposed against the world's No.2 natural gas producer.
"We are moving in only one direction – forward and towards victory," says Ukraine's President Volodymyr Zelenskyy, visiting the frontline in liberated Kharkiv today after his troops re-took 6,000 square kilometers of land, some 1% of the country's entire mass.