END_OF_DOCUMENT_TOKEN_TO_BE_REPLACED

GOLD PRICES recovered more of last week's 2.6% plunge in Asian and London trade Tuesday, rallying to what was a new 7.5-year Dollar high in April at $1715 per ounce as industrial commodities fell back, longer-term interest rates fell, and world stock markets retreated after Wall Street's S&P500 index of US corporations rose back to New Year 2020's level and the Nasdaq index of tech stocks hit a new all-time high.
The world's largest economy snapped its longest-ever expansion in February, the National Bureau of Economic Research's Business Cycle Dating Committee said Monday, hitting its first recession since 2009 but with a recovery most likely starting in April or May.
Widely accused of boosting the stock market with its return to zero rates and massive new QE – rather than supporting the 'real' economy against the Covid Crisis – the Federal Reserve yesterday expanded its forthcoming 'Main Street lending program' to smaller companies, funded by $75 billion of equity from the Treasury.
"The economic narrative has tilted in favor of a V-shaped recovery in the blink of an eye," says US investment bank Morgan Stanley's strategist Guneet Dhingra, pointing to the fast-steepening yield curve, with longer-dated US Treasury bonds now offering the most over shorter-term debt since February 2018.
Starting its 2-day June meeting on Tuesday, the Fed's policy team "[is] thinking hard about a new tool that would reinforce [low rates] by committing to buy Treasury securities in whatever amounts are needed to peg certain yields at certain levels," reports the Wall Street Journal, claiming that the US central bank may announce 'yield curve controls' in the fashion of Japan and now Australia when it speaks tomorrow.
Climbing over 44% above March's Covid Crash low, the Nasdaq-100 yesterday "marked a new bull market on the same day that the US economy was officially declared to be in a recession," notes Reuters.
Priced in gold, one unit of the Nasdaq ended Monday at 5.8 ounces – back where it began 2020 having trended lower since October 2018. 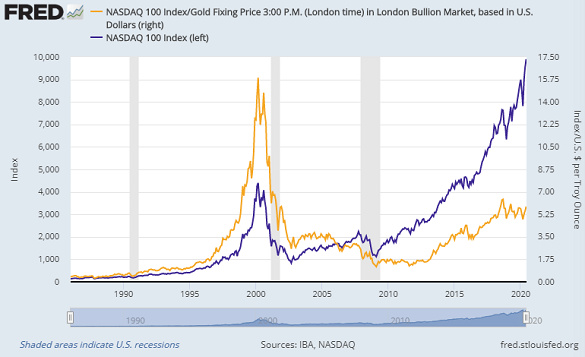 Led by Alphabet (Nasdaq: Googl), Netflix (Nasdaq: NFLX) and Amazon (Nasdaq: AMZN) – now up 5.8%, 27.3% and 33.0% respectively year-to-date – "The stock rally [has] included not only high-flying technology companies that provided sought-after services during recent shutdowns," says MarketWatch, "but also companies battered by low oil prices and the near halt in travel.
"The Federal Reserve has been wildly successful in terms of keeping credit flowing during the pandemic."
"I'm finding it exciting," the news-site quotes Diane Jaffee at $212bn asset managers TCW, calling the gains in equities "not for a short term, but longer term."
"The Federal Reserve is throwing everything, even the kitchen sink, in the economy," says ETFTrends.
"The central bank has enacted near-zero rates and unlimited bond purchases, including investment-grade and speculative-grade corporate debt for the first time, to support credit markets."
With the US Fed now buying junk-rated US corporate bonds, the iShares iBoxx $ High Yield Corporate Bond ETF (NYSEARCA: HYG) has now recovered almost all of Feb-March's 25% plunge, made as speculative bond yields more than doubled from their 2019 average to reach what ratings agency Moody's called "paralyzing highs" of nearly 12% per annum – fully 1,100 basis points above benchmark US government bond yields.