END_OF_DOCUMENT_TOKEN_TO_BE_REPLACED

FRESH outflows from gold-backed ETFs failed to stop the metal holding above what traders called the "psychological $1800 level" in Asian and London trade Tuesday, defying yet more investment liquidation as longer-term interest rates reach multi-year highs in the bond market ahead of the new US Biden administration pushing through $1.9 trillion in Covid relief and stimulus.
European stock markets were mixed after New York's tech-heavy Nasdaq sank 2.5% on Monday, a "hammering" also hitting tech giants outside the US notes Barron's.
Europe's Brent crude oil benchmark meantime touched 12-month highs Tuesday morning above $66 per barrel, erasing the last of the Covid Crash's 70% plunge.
"Gold has posted a relatively sizeable rebound as the Biden stimulus package comes back into focus," says chief analyst Rhona O'Connell at brokerage StoneX.
"The markets are [also] expecting a dovish stance from [US central-bank chief] Jay Powell in his semi-annual Congressional testimony today...Any surprise might take some off the froth off gold's latest move."
Gold ETFs led by the giant SPDR product (NYSEArca: GLD) meantime "continue to bleed metal" O'Connell adds, "with redemptions in eleven of the past twelve days."
The GLD yesterday shrank by 1.0%, needing 12.2 fewer tonnes at 1,115 – its smallest since mid-May 2020.
Smaller competitor the IAU from iShares was unchanged at its smallest since end-December having not seen any days of new inflow for more than a month. 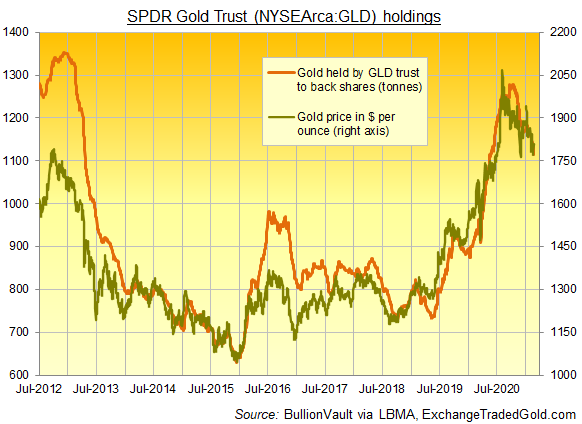 While central banks across the world are holding short-term interest rates near, at or below zero, longer-term rates in the bond market have continued to rise with the recovery in commodity prices.
"A natural rise in long-term rates could [now] push up the cost of issuing debt," said Bank of Japan boss Haruhiko Kuroda last week, "but that is something government must accept."
Tokyo's central bank has targeted a zero rate on 10-year Japanese yields since 2016, buying or selling those government bonds as part of its "yield curve control" to try stimulating inflation and growth.
Ten-year JGB yields today touched late-2018 highs above 0.11%.
With the UK's Prime Minister Johnson now setting out the first major-economy's 'roadmap' for ending lockdown and other social restrictions as first vaccinations reach nearly 1-in-5 of the entire population, 10-year Gilt yields have risen 0.39 percentage points since this time last month, the steepest developed-economy rise after low-Covid nations New Zealand (up 55 basis points) and Australia (+43bps).
UK government borrowing costs today neared 0.71% on 10-year Gilts, the highest since New Year 2020, while Australia's 10-year yield hit its highest since April 2019 at 1.65% per annum.
Yesterday's drop in the stock price of last year's big FAANG Covid Crisis winners also coincided with so-called crypto-currency Bitcoin sinking from fresh all-time highs, trading in a new record daily range of $11,000 – three times the prior 2021 daily average – to bottom at $47,000.
"The vaccine rollouts and strong optimism over economic recovery have led to some liquidation in the yellow metal with risk-on sentiments," says analyst Tapan Patel at Mumbai brokerage HDFC Securities.
For households in India however – the metal's No.2 consumer market – "the fall in gold prices has allowed investors who were waiting to buy gold at lower levels."
Despite further outflows from the giant SLV silver-backed ETF overnight, silver held firmer than gold bullion on Tuesday, albeit 50 cents below a pop to 3-week highs at $28.30 per ounce in early Asian trade.
Platinum prices slipped once more, down almost $100 per ounce from last Monday's 6-year high at $1340.