END_OF_DOCUMENT_TOKEN_TO_BE_REPLACED

GOLD BARS traded in London's wholesale market ended Friday with the highest weekly close since May 2021, trading $5 shy of yesterday's new 8-month spot market high of $1900 per ounce as Moscow's President Putin announced "purely defensive" military drills – including nuclear exercises – for the weekend, and separatist leaders in the 'breakaway' regions of eastern Ukraine ordered "mass evacuation" to Russia.
Global stock markets fell once again, with volatility "magnified" by trading in leveraged options contracts, according to Bloomberg.
Trading volumes in US Comex gold options jumped Thursday as prices rose above $1900 per ounce for the first time since June.
"Investors have been seeking protection in haven assets like gold," Reuters quotes one analyst, "not only because of the Ukraine situation and heightened stock market volatility but surging inflationary pressures too."
Net investment demand for physical bullion has turned negative however on this week's multi-month and near-record price highs, with betting on Comex options rising sharply while coin sales slow and gold-backed ETF holdings are left little changed. 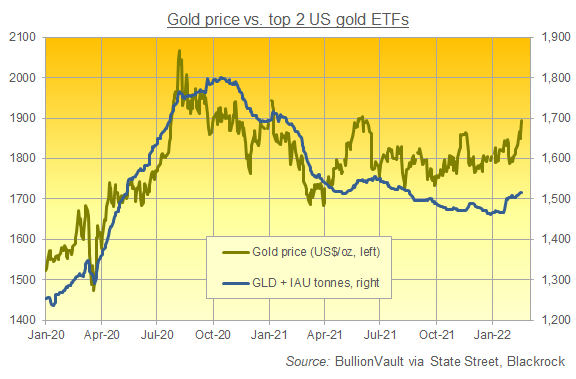 The giant SPDR Gold Trust (NYSEArca: GLD) did not change in size for the 4th session running yesterday, needing 1,019 tonnes of gold bullion bars to back its shares in issue, the most since mid-August.
The smaller iShares gold ETF product (NYSEArca: IAU) has meantime expanded by a little less than 4 tonnes this week, heading for its 2nd consecutive weekly inflow and needing 497 tonnes of backing.
Prices in China's Shanghai Gold Market today hit their highest since June last year, but held 14.0% below the all-time high in Yuan terms to fix at ¥385 per gram on Friday.
With US Dollar prices for gold landed in London – heart of the world's physical bullion bar storage and trading network – now 7.9% below August 2020's all-time high, that saw the premium for metal reaching China, the No.1 gold consumer market, retreating to barely $1 per ounce, the smallest incentive for new imports since the global price spike of November.
"In general in Ukraine there is a massive violation of human rights," Putin said Friday, having claimed "genocide" against Russian speakers in Donbass and Donetsk earlier this week but with Kremlin officials now denying knowledge of any evacuation.
Officials in the Ukrainian-controlled frontline town of Svitlodarsk already report 33 violations of the 2014 ceasefire by Russian-backed forces today.
Silver prices meantime continued to lag the move in gold bars, briefly topping $24 per ounce for the first time in 3 weeks.