END_OF_DOCUMENT_TOKEN_TO_BE_REPLACED

GOLD PRICES retreated from their third attempt on $1480 per ounce in 3 sessions in London trade Wednesday, moving flat for the week so far after US gold ETF holdings shrank to their smallest size in a month as Wall Street set yet more all-time record highs.
World stock markets struggled to extend their new record highs Wednesday, while major-economy government bond yields ticked higher, raising the cost of borrowing.
"There are several drivers that, over the medium-term, should support higher investor allocations towards gold," says specialist consultancy Metals Focus, looking ahead to 2020.
"A deteriorating macro-economic backdrop [should] feed through to weakness in equity markets," Metals Focus says, also pointing to "the persistence of loose monetary policies, with further loosening still possible."
Betting on end-2020 interest rates in the US, however, now sees an even chance that the Federal Reserve won't cut again after this year's 3 reductions, data from the CME derivatives exchange suggest.
This time last month traders saw a two-in-three chance of 2020 rate cuts.
But together with the  mountain of negative-yielding government bonds, plus scope for the US Dollar to reverse the last few years' gains, "All this should [see] an acceleration of the
gold rally from the second half of 2020 and during 2021," Metals Focus says.
New Year 2020, in contrast, will see "gold prices...move broadly sideways and even at times suffer liquidations."
Tuesday saw shareholders in the giant SPDR Gold Trust (NYSEArca: GLD) liquidate 0.6% of the world's largest gold-tracking ETF product.
That cut the GLD's growth below 12% for 2019, down from 17.5% at September's peak.
The GLD's cheaper but less heavily-traded competitor, Blackrock's iShares Gold Trust (NYSEArca: IAU), was meantime unchanged Tuesday at a record size.
Growing by 29.1% so far in 2019, the IAU is now two-fifths as large as the GLD, up from a little over one-third its size at New Year. 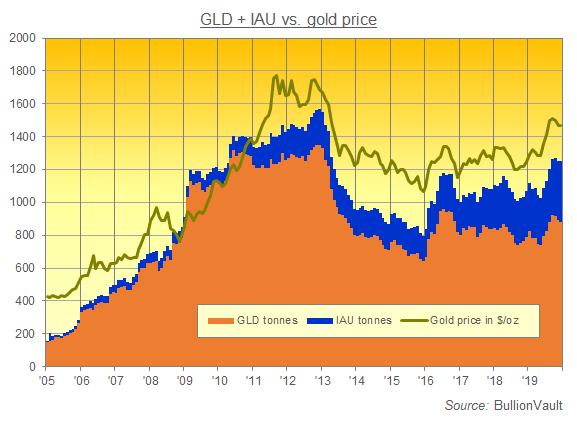 With the GLD shrinking on Tuesday, the combined size of New York's 2 largest gold-backed ETFs fell back to need 1,251 tonnes of bullion, the smallest in a month and now flat from early September.
While the IAU charges 0.25% per year in management fees, the GLD charges 0.40%.
"Major investors with [direct] access to the London vaults can get storage at around 0.1%," according to a Bloomberg report last year.
"Online trading platform BullionVault [then as now] charges as little as 0.12% per annum for allocated gold."
Wednesday saw Euro gold prices rise and then retreat less than Dollar prices, trading at €1325 per ounce by early afternoon in London as the single currency held firmer on the FX market.
UK gold prices in contrast held near 2-week highs, some £40 per ounce above the low hit on last week's Conservative election victory to trade at £1026.
Inflation in the 19-nation Eurozone and also IN the UK held unchanged in November, new data said Wednesday, raising the 'core' cost of living – excluding 'volatile' fuel and foods – by 1.3% and 1.7% per year respectively.