END_OF_DOCUMENT_TOKEN_TO_BE_REPLACED

GOLD BULLION held firm this week against a falling US Dollar, trading at $1645 per ounce Friday afternoon in London but dropping close to 8-month lows in Euro and Sterling terms as gold-backed investment ETFs shrank yet again and global stock markets fell for the 3rd day running ahead of next week's Federal Reserve decision on US interest rates.
Betting on another 0.75-point rate hike at next week's Fed meeting has eased back, but it remains the conviction trade at well over 8-in-10 positions on derivative exchange the CME's contracts.
Betting on December's decision however continues to see a better than 1-in-2 shot for the Fed slowing its rate rises to a half-point, putting the overnight cost of money at a ceiling of 4.50% per annum at year-end.
Today's closely-watched core PCE data said inflation rose only to 5.1% in September against 5.2% predictions among analysts.
"We see gold ETF outflows continuing to the end of the year," said Suki Cooper, executive director of precious metals research at global bank and London bullion market-maker Standard Chartered, on a review yesterday of last week's LBMA industry conference.
"The turning point comes when we see the Fed pivoting [away from further rate rises] and the market for now is very much focused on US Dollar strength." 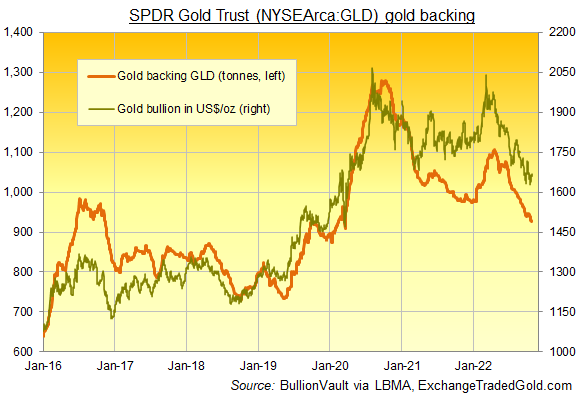 Thursday saw the giant GLD gold ETF – listed primarily in New York, vaulted in London, and now needing the smallest bullion backing since 23 March 2020, the day that the UK's Covid lockdown began – shrink by 0.3% as investors liquidated more shares in the trust.
That put the GLD ETF on track for its 3rd weekly outflows of investor cash in a row, while smaller competitor the IAU has now shrunk 9 weeks running.
"There's a tournique on the bleed" of gold ETF outflows, said James Steel of bullion clearing bank HSBC on Thursday's LBMA webinar, "and we see less outflows and some buying ahead of the end of the Fed hiking cycle," somewhere in late-Q1 and into Q2 2023.
HSBC then sees the gold ETF investment holdings "stabilizing and rebuilding in the second half of next year as geopolitical issues come to the fore and the market won't be second-guessing itself over Fed rates."
"That rebuilding would likely mark a change in the direction of gold prices," added Rhona O'Connell, head of market analysis for Europe and Asia at brokerage StoneX Financial Ltd.
New inflation data today said that the cost of living is accelerating faster than analysts forecast in Tokyo, Germany, France and Italy, setting new multi-decade records.
But yesterday's US GDP estimate said the world's largest economy grew 2.6% annualized in real terms in Q3, more than reversing Q2's drop, as that data-set's inflation figures slowed hard from the worst in 4 decades.
Benchmark US Treasury bond yields rebounded sharply today, jumping back above 4.00% per annum ahead of next week's Fed meeting but holding 0.24 percentages point below Monday's new 14-year high of 4.25%.
Adjusting for market expectations of inflation over the next decade, benchmark TIPS yields traded down to 1.50% per annum, also more than 1/5th of a percentage point below last week's new 13-year high.
"Gold failed again to make a sustained move higher despite the weak Dollar," says gold refining and finance group MKS Pamp in a trading note.
Friday's action saw the UK gold price in Pounds drop to £1422 per ounce, down 3.3% for the week, while the Euro gold price also dropped close to its lowest since February – start of Russia's invasion of Ukraine – at €1647.
With inflation slowing for the 5th month running in September to 13.7% per year, the Central Bank of Russia today kept its key interest rate unchanged at 7.5%.
"The partial mobilisation will serve as a deterrent to consumer demand and inflation over the horizon of coming months," the CBR said in its policy statement.
"However, its subsequent effects will be pro-inflationary as it adds to supply-side restrictions."