END_OF_DOCUMENT_TOKEN_TO_BE_REPLACED

GOLD PRICES rose again on Thursday, reaching $1815 per ounce in London trade despite a small outflow from gold-backed ETFs as global stock markets, commodities and longer-term interest rates all fell – as did cryptocurrencies led by Bitcoin – amid rising US-China tensions over both Taiwan and control of tech-stock investment.
The giant SPDR Gold Trust (NYSEArca: GLD) ended Wednesday with its 4th daily outflow in a row, reaching its smallest size in a month.
But gold bullion priced in the Dollar traded 1.5% higher for the week so far on Thursday as all other markets except government bonds sold off.
While total ETF trust fund holdings grew 1.1% across the second quarter of 2021, June saw net liquidation of 0.1% from May according to data compiled by the mining industry's World Gold Council, holding the quantity of gold needed to back the sector's shares in issue at 3,628 tonnes.
Equal to almost 13 months of global gold-mining output, that was 284 tonnes below last October's record high for gold ETF holdings worldwide. 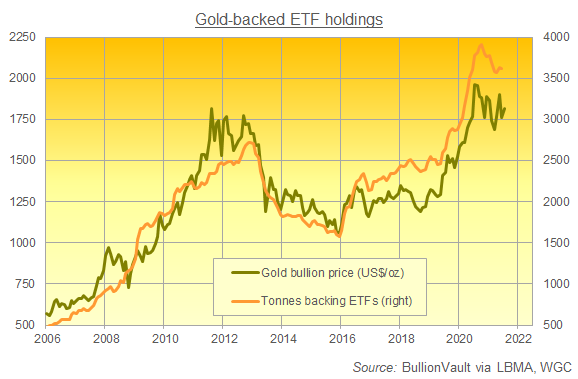 June marked gold's worst monthly price drop in 5 years, and saw the major US-listed gold ETFs expand slightly, led by the iShares product (NYSEArca: IAU) and the larger GLD.
But European funds saw net liquidation by shareholders, with the region's largest such product – iShares Physical Gold (LON: SGLN) – shrinking by 3.8%.
With European share prices losing over 2.0% on average on Thursday, German, French and Dutch government debt prices rose, pushing longer-term interest rates lower, but Italy, Spain, Portugal and Greece saw their borrowing costs tick higher.
US government bond prices meantime rose again after slipping into Wednesday's close, pushing 10-year Treasury yields back below 1.30% and pulling 10-year inflation-protected TIPS' yields back below minus 1.00%, a series low when first hit as gold prices neared $2000 per ounce last July.
Today's bond prices pushed the implied pace of US inflation over the next decade down to 2.24% per annum, the lowest such 'breakeven' rate in 4 months and 30 basis points below mid-May's 8-year high.
Western corporate debt prices also rose Thursday, edging borrowing costs lower and pushing yields on even 'junk' rated bonds down to late-1990s' lows over Treasury yields.
Chinese corporate bond yields have in contrast been rising, "prompting fears over a coming surge in defaults" in that $17 trillion market according to the Financial Times, because "as Beijing forces more accountability on its weakest companies to reduce moral hazard, the defaults are coming," says Bloomberg.
"In China, the current default rate is around 1%; in more developed markets, it's closer to 2% to 3%. Removing government support in order to close that gap is a delicate process."
Chinese tech stocks extended their plunge today, with conglomerate Tencent down 2.9% for the day, e-commerce giant Alibaba down 2.7% and retail platform Meituan almost 5.5% lower for the day after Beijing this week issued what Bloomberg calls "a sweeping warning" about data security and listing shares on foreign stock markets.
Taxi-app Didi, which floated on the New York Stock Exchange 2 weeks ago, has now fallen by 1/5th – and is being sued by US shareholders – after Chinese regulators told online stores to pull its app from the listings.
With other Chinese firms now abandoning their plans to float in New York, "It was reckless and irresponsible" to let Didi float on the NYSE, says Republican senator Marco Rubio, comments echoed by other 'hawkish' US politicians.
"The Chinese Communist party blocks US regulators from reviewing the books."
The US has meantime sent "a clear message of deterrence across the Taiwan Strait" said White House advisor Kurt Campbell on a webcast yesterday, warning Beijing against making any "catastrophic" attempt to seize the island of Taiwan after the mainland dictatorship tightened its control of former 'special economic zone' Hong Kong.
"If a major incident happened [over Taiwan], it's safe to say it would threaten the survival of Japan," said Tokyo's deputy prime minister Taro Aso on Monday, saying Japan would then join the United States in defending Taiwan – "a big shift for a pacifist nation" according to one long-time Asia watcher – because "Okinawa could be next."
So-called cryptocurrency Bitcoin meantime sank 6.3% to hit 2-week lows, losing over half its US Dollar value from mid-April's record high but still 3 times its price of a year ago.
Ethereum lost 10.0%, Ripple 7.7% and 'comedy' token Dogecoin 9.4%, now down by almost three-quarters from its early-May peak.
Crude oil sank again, erasing the last 4 weeks' spike to 3-year highs as the Opec+ cartel of producer nations continued to argue over output quotas imposed last year to stem the historic Covid Crisis crash in prices.
"The current disagreement between Saudi Arabia and the UAE is not yet an existential threat for continued Opec+ collaboration," says a note from French investment bank and London bullion-market member Natixis.
"The most likely outcome sees Saudi Arabia and the UAE essentially coalescing on what they agree on – the need to increase supply in the short term."